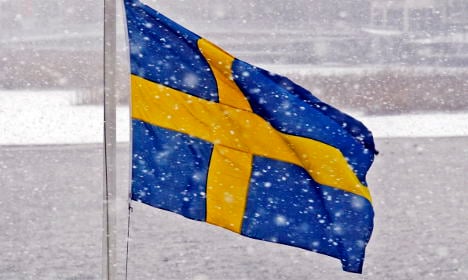 A Swedish flag blowing as snow fell in Stockholm last month. Photo: Hasse Holmberg/TT
Despite forecasters announcing last month that spring had sprung early in parts of Sweden and even suggesting that budding barbecue lovers might start causing grass fires, it seems winter snow is making a comeback.
Class one weather warnings have been issued in several areas in the south and west of the country: Bohuslän, Dalsland and Värmland.
The warning level is the lowest of three categories used by the Sweden's official weather agency, SMHI, but nevertheless tells Swedes to beware of “serious” conditions that could create “risks to public safety and disruption of some public services”.
On Wednesday afternoon snow was already falling in some of the areas identified by the agency, with heavier downfalls expected later in the day, alongside strong winds.
Forecaster Lisa Frost told the TT news agency that residents could expect between five and ten centimetres of snow, followed by slushy rain.
“We have temperatures close to zero degrees and so it might turn into some pretty wet snow (…) you should take it easy on the roads,” she said.
The cold snap is expected to push north towards Norrland later in the week although no major snow dumps are expected there, Frost added.
People living in Stockholm and Gothenburg have also been told to expect light snow in the coming days.