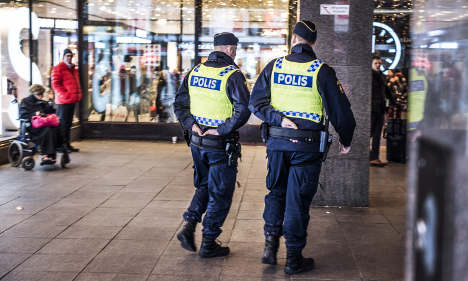 Police in Sweden in November, after the threat level was raised. Photo: Thomas Oneberg/TT
Sweden's Security Service said it had decided to move the country back down to a lower threat level after consulting with the country's military and intelligence agencies.
“I have made an overall assessment, and decided on a return to the elevated threat level that previously applied in Sweden, since the autumn of 2010. We are thus going from Level 4 (high) to Level 3 (elevated) on the five-level scale”, announced its Director General Anders Thornberg in a statement.
Sweden's Home Affairs Minister Anders Ygeman said that he strongly backed the move.
“It is a decision taken independently by the authority. I have great confidence in the security police's assessment and their work for safety and security,” he told the TT news agency.
Sweden's terror threat level was raised to 'high' for the first time in history in November 2015, days after the attacks in Paris left 130 people dead and during a separate hunt for a suspected terrorist in the Nordic country.
However the terror suspect police arrested soon afterwards in northern Sweden turned out to be innocent and later demanded compensation from the Swedish government. Police arresting a terror suspect in Boliden, northern Sweden in November. Photo: Robert Granström / TT
Thornberg said on Thursday that the violence in France had “prompted intensive work by security and intelligence services across Europe to analyse and assess the situation”. However he added that “although many questions remain to be answered, the overall picture has become somewhat clarified since then”.
But Säpo said that Swedes should be aware that there are still some potential attackers who have both the intent and the capability to carry out extreme violence in Sweden.

“It is therefore important to point out that the threat is at an elevated level, even after the reduction of the terrorist threat level. The situation has been serious since 2010, and is still serious”, concluded Thornberg.

Sweden raised its threat level to category three in 2010 after two bombs exploded in central Stockholm, leaving the attacker dead but failing to kill any others.