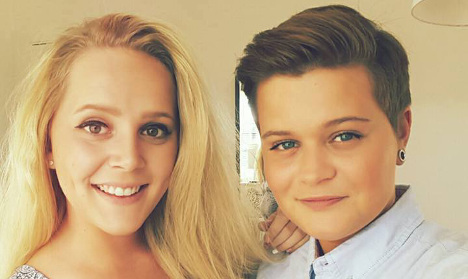 Denise (left) and her partner Elin (right). Photo: Private
When the 21-year-old posted an advert looking for an apartment to rent with her girlfriend, she was prepared for some homophobic comments. But the student, who wants to be known simply as 'Denise' told The Local she was shocked at the level of abuse she and her partner Elin were being subjected to.
“The worst comments were that they thought that Elin wanted to look like a guy,” she said.
“We got a lot of other comments like 'she looked like she was eight years old' and that I would be better off with a man.”
Denise, who is a nursing student, met her girlfriend Elin, 23, when they were both studying in Örnsköldsvik in northern Sweden. She says she had not previously identified herself as bisexual, but fell in love with her new partner's personality.
“She has made me a better person. I can be myself with her and she always tells me how much she loves me.”

Denise (left) and her partner Elin (right). Photo: Private
When Elin got a job in Gothenburg, the pair had a long-distance relationship for six months, before deciding to move in together on Sweden's west coast. However, the moment they reached out on Facebook accommodation-hunting groups, people began posting negative comments as well as sending nasty private messages to the couple.
Denise said she was surprise by the reaction, especially in Sweden which has a reputation as one of the most open and gender equal places on the planet.
“I thought somebody would mention 'the gay stuff' but I didn't think we would get those kinds of comments.”
“I was surprised that people could sit behind their laptops and say such bad stuff to people (…) I think that I have good tolerance levels but when someone says something bad about your girlfriend you fire back,” said Denise, explaining her decision to speak to the Swedish media.
READ ALSO: 'In Sweden we should all understand gay culture'
She said that the couple had secured a lead on one apartment prior to talking to reporters and that a few other people had been in touch since she was first interviewed by the GT newspaper.
Gothenburg, like most large Swedish cities, is experiencing a housing shortage, with rental costs rocketing as a result.
Campaign group ILGA-Europe recently rated Sweden the top spot in Scandinavia for lesbian, gay, bisexual, transgender and intersex people (LGBTQ).
However, Denise's experience is not the first to cause commentators to question tolerance in Sweden in recent months.
The owner of a new night club for LGBTQ people in Falkenberg told The Local how he was threatened with violence for promoting the initiative. And last year a hotel hit the headlines after a gay man was told he could not book a spa weekend, but managed to make the same reservation a day later, after using a woman’s name.