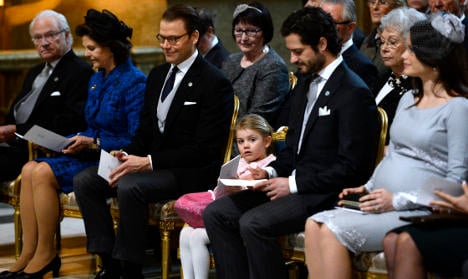 Sweden's King XVI Gustaf kicked off the regal proceedings by revealing the baby's full name as Prince Oscar Carl Olof at a gathering of top politicians and royals at Stockholm's Royal Palace. He also announced that the baby would become the Duke of Skåne, a region in southern Sweden. To his immediate left in this photo (below) is his son Prince Carl Philip, who is sitting next to the Prime Minister Stefan Löfven. While the King was in full royal mode, Sweden's new prince was at home with his mother, Crown Princess Victoria, and her first-born child Princess Estelle. This slightly grainy snap is a close-up of the first official photo of Prince Oscar in his carry cot, with his sister standing by his side looking like she hasn't quite grasped what has happened.

After Prince Oscar's name was formally revealed, a 21-gun salute was fired from the Skeppsholmen island in Stockholm at noon. Guns were also fired from Boden, Härnösand, Karlskrona and Gothenburg in honour of the new prince.

Most of the royal family then turned out for a traditional service to welcome the new baby known as Te Deum. Princess Madeleine and her husband Chris O'Neill, who have been living in London since last year were present, alongside Prince Carl Philip's wife Princess Sofia, who is also due to give birth either this month or next. Princess Estelle still looked a little shocked among her nearest and dearest relatives. The service was also attended by some of Sweden's most senior politicians including the Prime Minister Stefan Löfven, who arrived with his wife Ulla. After the ceremony it is understood that Prince Daniel and Princess Estelle returned home to their Stockholm residence, Haga Palace, to spend more time with baby Prince Oscar. The Local wishes them a fantastic first day together as a family!