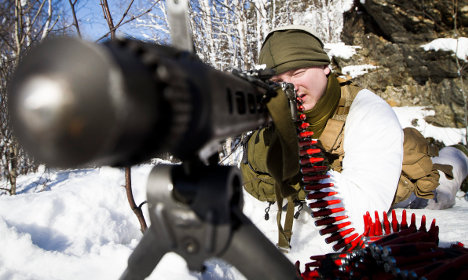 A picture from the 'Cold Response' exercise in 2014. Photo: Mattis Wennemo/Forsvaret/NTB scanpix/TT

A total of 15,000 soldiers from 15 countries are participating in the huge operation 'Cold Response' held in Norway and in Swedish airspace. Providing 2,000 of its own troops, non-Nato member Sweden is the third-biggest nation involved in the two-week drill, behind Nato countries Norway and the United States.

“It's my first exercise so it's fun to be here. I have just started working as a soldier. I'm a signaller and am learning a lot about staff services, routine services, radio discipline and the like,” new soldier Henrik Axelsson told Swedish radio.

The exercise is organized by Norway within Nato's 'Partnership for Peace' program, which is aimed at boosting military cooperation and building trust between the alliance and non-member states.

Cold Response, which ends on March 10th, teaches military personnel how to best operate in sub-Arctic conditions in an international crisis situation.

READ ALSO: 'Sweden's 200 years of peace is no coincidence'

Sweden has a 20-year history of working alongside Nato as a partner on missions and training operations. But the 'Cold Response' exercise comes just weeks before the government is set to present a proposal for the Nordic nation to become a 'host country' for the military alliance.

The deal, which is likely to be approved in parliament, means that Sweden is able to invite Nato to base its troops in Sweden and will allow Nato countries to use Swedish territory for transportation.

It has sparked concerns among its critics that it could allow Nato to ultimately place nuclear weapons in Sweden, which Defence Minister Peter Hultqvist has said is not an option.

“We are not prepared to accept nuclear weapons on Swedish territory, in Swedish ports or in Swedish airspace. I expect that future governments will stick to that as well,” he told the TT newswire earlier this week.

Traditionally non-aligned Sweden has seen increased debate in the past year about seeking membership in the military defence alliance. A poll released in October 2015 suggested that 41 percent of Swedes are in favour of joining Nato, 39 percent are against the idea and 20 percent are uncertain.

The rise in support is largely credited to growing fear of what is perceived as a potentially aggressive Russia. Sweden's security service Säpo said last year that the biggest intelligence threat against Sweden in 2014 came from its eastern neighbour.