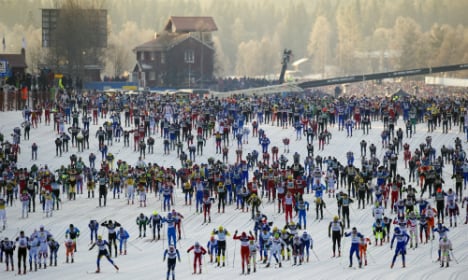 “I’m feeling a bit moved. It was tough today, but I managed to keep my focus and keep calm until the end. It’s unbelievable that I made it. It was my dream to win it again,” Dahl, who also won the competition in 2014, told public broadcaster SVT.

The first woman to cross the finishing line was Katerina Smutna from Austria, finishing the race in four hours, 17 minutes and 56 seconds. Sweden’s Britta Johansson came in second, just two seconds after Smutna.

Norgren was disappointed because the female skiers did not have their own tracks for the finish, but had to share those used by the men and who were still finishing their race. Many female skiers had a hard time to get through the male skiers.

“It was a shame with how it ended because we didn’t get our own tracks although [organisers] had said we would,” Norgren said.

Vasaloppet is one of the highlights of the Swedish sporting calender and has grown into a massive public and television event.

It is one of the world’s oldest cross-country races and is based on Swedish King Gustav Vasa’s attempt to gather farmers for a 1522 revolt against Denmark, which was occupying Sweden. After failing to get support, Vasa fled, but the locals then changed their minds and sent their best skiers to bring him back.