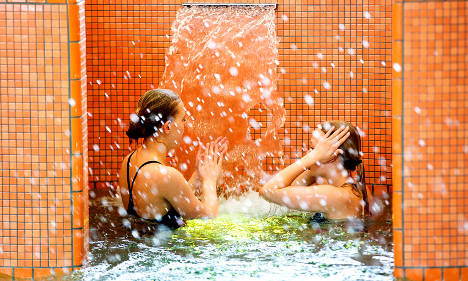 Girls in the Hylliebadet pool. Photo: Hyllie.com
The Hylliebadet pool in Malmö has decided that only women and girls should be allowed to swim in its waters from 3pm on Tuesday, as part of its efforts to promote International Women's Day.
But the move has sharply divided people in Sweden, usually famous for promoting gender equality.
Regional newspaper Sydsvenskan reported that a similar initiative last year had led to an eight-year-old boy missing out on celebrating his birthday at the pool, resulting in his mother sending a strong complaint to the city council.
It also interviewed another family who said they were furious with the newly renovated pool adopting the same strategy in 2016.
“It's not okay that mothers with small boys cannot come here, ” commented father Christoffer Andersson.
“I think that everyone should have the same access to the pool. It means that I cannot go swimming with my son on Tuesday,” added his partner Pernilla.
Plenty of Swedes rushed to Twitter and Facebook to share their views on the debate.
“Fantastically bad. If we are to have an egalitarian society (which the most purely democratic people seem to advocate in Sweden), this is just stupid. We do no favours by splitting, discriminating and segregating,” Jennifer Qvick wrote on the paper's Facebook side.
But others said they could not believe that the pool's decision had caused so much controversy.
“Damn right it's nice to be able to go and bathe/swim/just walk around in a bikini and not for one second worry about/be afraid of a lot of guys staring or making throwaway comments or even groping in a hot tub. It's not about shutting out men, but about giving women space,” posted Emilia Emilio.
The Local was unable to reach the swimming pool's manager Anki Magnusson for comment, however he told Sydsvenskan that he stood by his decision.
“That men can't have access to the pool for one day a year is something they can endure,” he said.
But he noted that he would take the time to evaluate whether or not it was the right decision to prevent mothers with young sons from participating in the women-only event.
International Women's Day is celebrated around the world on March 8th. This year's theme is 'pledge for parity', with a focus in highlighting the global gender pay gap.