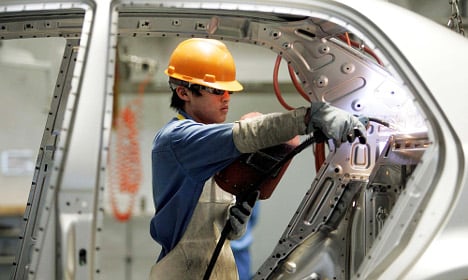 A worker welds the interior of a car at a Geely factory in Ningbo, China. Photo: Eugene Hoshiko/AP

An was in Gothenburg, Sweden's second-biggest city and auto industry hub, to discuss the possibility of setting up Geely's European head office near
that of Volvo Cars, which it bought from Ford in 2010.

Sweden is however not the only country the company is considering, and no date has been set for when it could begin production in Europe, An said.

Geely already has a foot in Britain, where it bought the London Taxi Company in 2012, the maker of London's famed black cabs.

And the company already sells Geely models in Eastern Europe — in Russia, Belarus, Ukraine and Azerbaijan — and in Turkey.