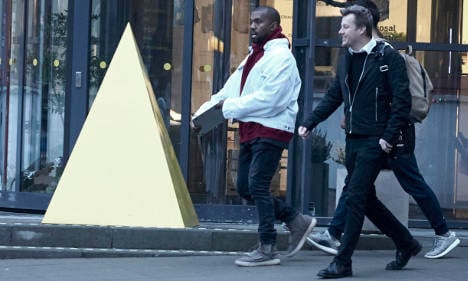 Älmhult residents were still in shock on Wednesday after the US hip hop star was spotted at Ikea on Tuesday afternoon before dining in one of the small town's top restaurants in the evening.

“He has been here with us but he has gone now,” Mats Stjemqvist, the owner of Brasserie Goaroije told Swedish newspaper Expressen.

“He was here with friends and aquaintances (…) It was amazingly nice. He was very friendly and enjoyed the food. It was a memorable day for tiny Älmhult.”

The restaurateur described scenes of chaos outside the brasserie in southern Sweden as fans gathered to try to catch a glimpse of their idol.

“Word spread, so there were a lot of fans out there. We had his bodyguard to help us with that.”

Stefan Marina, 19, a fan who met the musician, told Expressen that he had chatted to the star and got his signature and had even managed to crack a joke about the star's famous wife, Kim Kardashian.

“I asked if he would send Kim a greeting from me and he laughed,” said the teenager.

His friend, Senait Sewitt added: “He took his time and signed our shirts and greeted us and we told him how much we love him.”

Johanna Blomqvist, a press spokesperson for Ikea, initially refused to give any details about the rapper's visit, however she confirmed to Expressen late on Tuesday that he had “been on site and met our design department”.

Fellow tabloid Aftonbladet said that the superstar had been given a tour of the company's headquarters, which have been based in Älmhult for more than 60 years.

The hip hop artist, who turns 39 this year, has already launched numerous entrepreneurial ventures including his own clothing line, a collaboration on a shoe range for Adidas and a burger chain.

West is not the only global rapper to have taken a shine to Sweden recently.

Wyclef Jean fell in love with Sandviken after a gig there in 2013 and last year told a Swedish tabloid that he was planning a move to the town.