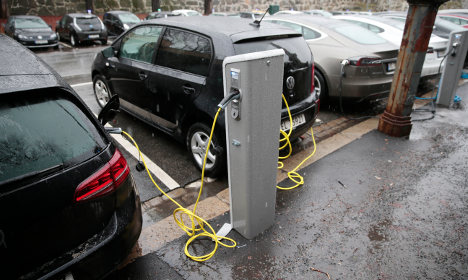 “To cement the increasing popularity of electric vehicles and ensure that customers fully embrace the technology… a simple, standardized, fast and global charging infrastructure is needed,” Peter Mertens, Volvo vice president for research, said in a statement.

Since 2009, automakers like Volvo have introduced about 30 electric or plug-in hybrid vehicle models throughout the United States, China, Japan and Europe.

The surge in popularity of electric and hybrid cars, which can use either petrol or electricity; has largely been due to increasing oil prices and environmental concerns.

One in five of all Volvo XC90s sold is a plug-in hybrid, according to the manufacturer, and in January, the XC90 was named North American car of the year.

“We see that a shift towards fully electric cars is already under way,” said Mertens.

But the battery life of electric of hybrid vehicles has been a problem, as has the development of uniform standards for charging stations.

The Berlin-based Charging Interface Initiative, which Volvo joined, and which includes a number of German firms and associations, has been developing a certification scheme for use by automakers around the globe.

“To really make range (mileage) anxiety a thing of the past, a globally standardized charging system is sorely needed. The lack of such a standard is one of the main obstacles for growing electric vehicles' share of the market,” said Mertens.