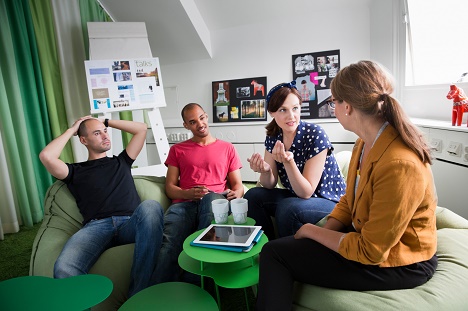 One of the factors that has contributed to Stockholm’s becoming one of the world’s great start-up capitals is the city’s strong technical and scientific institutions.

Stockholm University is of course home to the Nobel Prizes, while countless tech companies have emerged from the Royal Institute of Technology and Karolinska is at the forefront of medical research.

This heritage has left its mark on Stockholm start-ups’ approach to problem solving and creativity. Specifically, they test their ideas. They iterate and reiterate.

“Creativity is just doing something someone else hasn't thought about that works,” says Ankit Desai at Universal Music. But you have to find out if it works.

“Use the data and technology that you already have, create theories about what will work, and cheaply and quickly test those theories,” he says.

“That's the key, to test often. Test as much as you can.”

Most start-ups are founded on a hunch that there’s a better solution to an existing problem. But the devil is in the detail and that solution can probably be presented in a whole range of ways.

According to Klarna’s Niklas Adalberth, the first phase of a start-up is trying to figure out what the market wants. But the first iteration is never correct.

“You need to reiterate and recreate until you find out what the market actually wants,” Adalberth says.

“You have to think about trying things new ways all the time. And that applies to the entire team.”

Creativity itself is an iterative process.

So get out of your office (or your bedroom or the coffee shop) and start testing your idea.

That doesn’t mean you need a fully functional, perfectly complete product to take to market. Remember, the first draft of a great novel, the first demo of a classic album and the first prototype of a familiar product are usually just skeletons of the novel, album and product that finally see the light of day.

As long as what you’ve got looks good, people will be prepared to test it – and the feedback you get will be gold.

Start with asking questions. Survey your future customers. Then use that intelligence to create your beta version, your prototype. Release it cautiously and gather every piece of information you can about how people respond and interact.

Then do it again.

“There are plenty of ideas all over the place,” Kaj Drobin from TicTail points out.

“The difficulty isn’t creativity itself, but taking your idea and actually trying it out, executing it. Just do it.”

How to do it the Swedish way

What they say about start-up creativity the Swedish way

“We can explore our creativity thanks to the high standards in Stockholm. It's a luxury that comes once all the other conditions are met.” Caroline Walerud, Volumental

“I grew up in India and lived in France and the US for a while, and creativity is given more importance in Stockholm than anywhere else.” Ankit Desai, Universal Music

“We aren't necessarily more creative than other people, we just have different ways of thinking and doing things in Stockholm.” Anna Lithagen, Talent Tribe

Read the entire series about the secrests of Swedish startups here