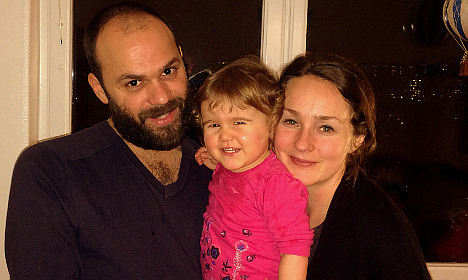 Mohammed Almasri and Elina Bloomberg live together in a flat in the south of Stockholm with their 18 month old daughter, Rita. The young couple seem settled and relaxed – loving and living in harmony and relief – far from the chaos that prompted their first meeting.

Rita scurries about the flat, naughty but gorgeous; crying one moment, laughing the next. She is the home’s beating heart, giving it life.

Mohammed, 30, was studying interactive theatre in Damascus before conflict erupted. Forced to abandon his studies, he eventually fled in January 2013 to Jordan where he found security – and later, love.

Elina, 33, hails from Stockholm and was on holiday in Jordan around the same time. She enjoyed the country so much she decided to extend her stay, resulting in an encounter that would change her life. Mohammed plays with Rita while Elina looks on

Describe how you first met

Elina: We met in Jordan in 2013 at a cultural center in Amman. It was warm and we were sitting outside. Mohammed was sitting there with some friends, talking, smoking, laughing; and I was sitting and reading at another table. I saw Mohammed and I thought he was like gold; he was shining.

I went to the table to introduce myself, because I knew his friends – but he was busy talking with them. He didn`t even see me coming. I was like, “Wow, he is amazing!” – but he didn't notice me at all. So later I ran into him in another café I was just tired of the situation so I went over and put my hand in his face, and said, “Hi, I’m Elina!”

Mohammed: I was struck by her eyes. But I was crazy stressed at the time – I didn’t speak any English and she didn’t speak Arabic, so I wondered how I could have any contact with her. I had just fled Syria and broken up with a previous girlfriend, so romance wasn’t really on my mind. I was also a bit worried as it was a totally new experience for me to have a relationship with a non-Syrian woman.

When she came back to Amman from her visit to Sweden and we had our first real date – just me and her. That’s when I began to realize she was perfect and we should be together. She understands me totally.

How did you bridge the language gap?

Elina: We started speaking English and using Google translate a lot. But if you really want to communicate with someone, you really can do it.

Mohammed: I used my theatre skills first, but it was a challenge…

Elina: … and it was funny sometimes too. One time he kept telling me how horrible I was, when he meant ‘incredible’. “You are so horrible!” he’d say [laughing].

Mohammed: ‘Incredible’…’horrible’. They have the same melody [laughing]

Elina: The same thing happened with ‘hungry’ and ‘angry’ –  he ended up thinking I was angry a lot whenever I said I was hungry, “Oh no, she’s ‘hungry’ again what should I do?” [laughter] A birthday card from Elina to Mohammed

How does it feel to be parents?

Elina: We were sort of shocked when we found out I was pregnant, but both of us wanted to have a child. Even though we hadn’t been together so long, we had spent so much time together in the beginning it probably equaled the same amount of time a regular couple would spend together over two or three years.

Mohammed: The decision [to have a child] was not something we reflected on too long. I don’t feel the need to live my life according to accepted conventions. I was elated when I found out. We celebrated with champagne.

Elina: Now [our daughter] Rita is my world; there is really nothing without her. If she wasn’t in my life, I feel like it would have no meaning.

Mohammed: Rita means everything. There is no life without her; she is the best and she comes first. We are both very involved in caring for her.

How is life in Sweden? What are some of the challenges?

Mohammed: I think I am doing well, but I think I should work harder on the Swedish language. Going to the supermarket can be stressful, and telling my family back in Syria that I’m changing the diapers made them laugh because they view that as a weird thing for a man to do.

Elina: Yeah, but for me it’s obvious that he should change diapers half the time – although I think that this equality thing is something all couples in Sweden can weirded out by.

I think having a family together is the challenge for anyone. I like to think that, in theory Mohammed has always been a feminist who believes in women and men’s equality, but I think in real life it can be really hard to put it in practice.

Mohammed: Elina makes me feel like I haven’t lost my home. She is my safety and tenderness; my safe haven. She is so energetic and strong. And she brought me Rita who saved my life before she was born,

Elina: First of all, I just love how he loves our daughter – it’s just so beautiful to see. He is such a loyal person and always tries to make the best of the situation, change it to something better, and make things happen. He also forgives easily, especially in times when I was ‘hungry’. [laughter] What do you value from the other person’s culture?

Elina: I really love the generosity, the welcoming ‘Arab way’ that means you get included fast and accepted in the community. I also like the ‘inshallah’ ethos, the idea that there is always something good that can happen. At the beginning I was really irritated by it, because If I wanted something in at a particular time; it`s not ‘inshallah’, it’s then, at that moment. But now I think it’s a relief to not get disappointed when things don’t go as you like, that there are other [good] things that could happen.

Mohammed: I really like their honesty with emotions. When Swedes are angry, they are angry, when they are sad, they are sad. They don’t put on masks. And usually I don’t like rules, but here the system was created to make life easier. It’s not like in the Middle East where rules make everything horrible and complicated. And I like that Sweden is an open place and for anyone; there is more space, you feel free to do anything – to implement ideas.