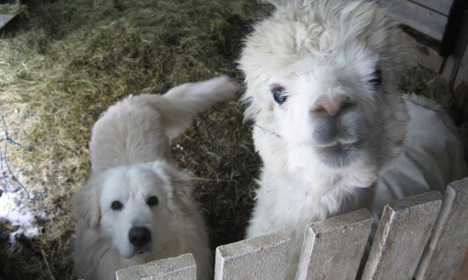 “The maremmano sheepdog is a is a very special kind of dog that is bred to protect flocks from predators. Therefore, I had high expectations of any new home for him,” Ida Leckström from the animal protection police told the Swedish newspaper, Aftonbladet.

However, when police advertised Leo on social media, the response was much larger than expected.

On a farm in Vemdalsfjällen Jan-Olof Östberg breeds sheep and alpacas and there were already maremmano dogs working to guard the animals.

“At first we did not know if it would work. It is one thing to bring in a maremmano puppy and let it grow up with the pack but quite another to take in an adult dog and try to teach it,” Östberg told Aftonbladet. “And Leo had also never encountered alpacas before.”

“He probably wondered what were the strange dogs with the long necks,” said Leckström. Leo has settled in well, although his integration into his new surroundings wasn’t without the occasional setback.

“When Leo first met the alpacas he was sceptical of them but quickly became interested,” Birgitta Ericsson, Östberg's partner and the co-owner of the alpaca farm, told The Local.

“Dogs sniff each other around the back when they make each other’s acquaintance but if a dog smells an alpaca’s rear end, the dog may pay for it with a hefty kick. Leo encountered this language problem almost immediately! However, after this incident Leo quickly showed the correct behaviour toward the alpacas.”

Despite initial appearances, maremmanos are not like golden retrievers. “The maremmano is a dog in the 60-kilogram class. They are like little polar bears and when they stand on their hind legs, they are as tall as you and me,” Östberg says. “They are bred to guard animals. Even against bears.”

Leckström agrees. “They are very clever and tough dogs and they are bred to make their own decisions to protect their flock. I've seen a movie where maremmanos went to attack a bear that threatened their flock – and the bear turned and ran!”