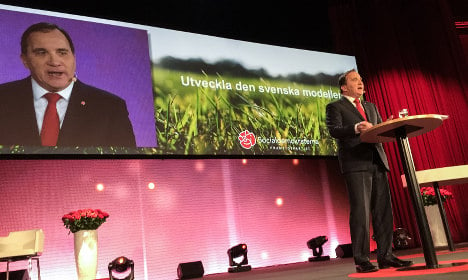 During his speech Löfven warned that Swedish society needed to be aware that social divides are growing. Photo: Per Knutsson / TT

During the speech delivered to around 500 of his party's local and regional politicians, Löfven warned that Swedish society should be aware that social divides are growing. He said that the country needed to reinforce and develop the so-called Swedish model, which is based on employer/trade union cooperation, a free market economy and a strong welfare system.

“Sweden has drifted apart,” Löfven said. “We see increasing differences between those with little education and those who have much, between rich and poor, between the inner city and suburban as well as between urban and rural areas.

“And these differences are now deeper than they have been in a long time.”

“Many don't have any idea about how their fellow humans who are living just a few bus stops away. It's dangerous, very dangerous for our society. People's ignorance about each other is being exploited by both right-wing extremists and by violent Islamists, in order to advance their own agendas.”

“The Swedish model is in our hands,” he said.

Löfven said that the Swedish model is founded on three critical parts.

“The first is that everyone works, which requires investment in education and infrastructure, to allow people and companies to succeed in the world economy.”

“The second is that resources are apportioned fairly so that profits do not just wind up in the hands of a few but contribute to the well-being of all and thirdly that there is a secure welfare system.”

“It's important that municipalities and county councils have the optimum environment for planning,” said Löfven.

“And our message to Sweden's welfare workers is that you shall not have lower salaries, but rather more colleagues,” he concluded.

During his speech Löfven also praised the municipalities for their open approach to taking in refugees and for making concerted efforts to integrate the new arrivals.