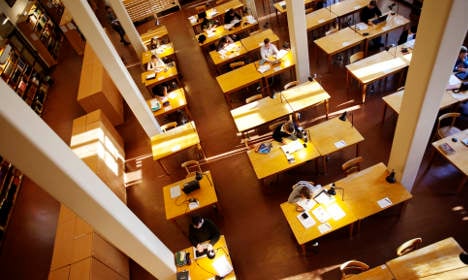 Pupils studying at a high school in Malmö. Photo: Tor Johnsson/SvD/SCANPIX/TT
Sweden has grabbed international headlines in recent years as its pupils' scores in maths and reading comprehension have slid down the global Pisa rankings, the OECD's core tool for measuring students' abilities.
On Monday a national report by the Swedish National Agency for Education pinned at least part of the problem on rising immigration to the Nordic country and warned that municipalities need to be given more resources to help new arrivals.
“We already know that immigrant students on average give a lower performance in school. Now we know more about how much the increasing proportion of immigrant students has affected scores,” said the agency's director Anna Ekström.
Skolverket's figures suggest that the proportion of students who did not get good enough grades to move on to the final three years of school in Sweden (gymnasiet) rose from just over 10 percent in 2006 to more than 14 percent in 2015.
Its report concludes that record immigration during this period played a “small but not insignificant” role in affecting results, due to the number of immigrants joining classes midway through the academic year rising from three to eight percent.
Ekström noted on Monday that the refugee crisis was continuing to put a strain on Sweden's education system.
“Lately there have been many newly arrived students and for schools and municipalities that have received many students, this can be a big challenge,” she said in a press statement.
Sweden's Education Minister Gustav Fridolin responded to the new report by admitting that Swedish schools have not always been able to provide the necessary support for immigrant children.
He told the TT news agency that he would push for the most affected schools to be given more resources.
“We need to put our focus on building equality into the system and we need to focus on schools. It is one of the most important things we can do in Sweden in order to be sustainable as a country.”
Reading and science Pisa test scores in Sweden have dropped by more than 20 percent since 2006, while mathematics results have fallen by 15 percent.
However a separate ranking last week listed the Nordic country as fifth in the world for literacy, arguing that access to newspapers, libraries, computers and educational resources was much greater in Sweden than in most other countries.
The research was led by John W. Miller, president of Central Connecticut State University in North America, who spent a decade analyzing literacy around the world and concluded that his list was much more nuanced than other studies such as the Pisa rankings which are focused purely on test results.