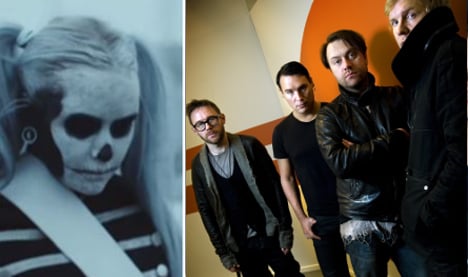 A screen shot from the video (left) and the band snapped in 2010. Photo: Dan Hansson/SvD/TT

The alternative musicians, who have released 11 studio albums and sold over three million records, revealed that they would be wrapping up the group in December, after they perform at Stockholm's Tele2 Arena.

The message, which was greeted with an outpouring of emotion by their huge Nordic fan base, came in a dark video, featuring a woman dressed as a skeleton.
After drumming on snowy Swedish streets, in a forest and while pacing through several tunnels, she is joined by crowds of people waving flags and carrying burning torches as they march through central Stockholm.
Towards the end of the video, titled 'Då Som Nu För Alltid' (Then as now forever), the words '16th May 1990 – 17th December 2016' pop up ahead of graphics reading 'last album' and 'last tour'.
“We are eternally grateful for your support, your patience and your love,” the group posted on their website soon after the video was released.
“Playing in this band is the biggest, most fun and challenging thing any of the four of us have done in our lives. It has always been about challenges, goose bumps and trying to have as much fun as possible on the road,” said the statement.
Kent were formed in Eskilstuna, west of Stockholm, 26 years ago and sing most of their songs in Swedish.
Many fans rushed to social media to share their sadness at the band's decision, while other eagle-eyed musical commentators noted that the freaky video included symbols depicting the group's iconic album covers, including a horse, dogs and a white tiger.
“Thank you for all the nice, strong moments when you put my feelings into words!” Anneli Andersson wrote on the band's Facebook page.
“Thank you for having accompanied my adolescence and adulthood!…And good luck with the new chapter in your lives,” she added.
Another of the band's supporters, Daniel Breitholtz, posted: “Thinking how lucky it is that one of the world's best bands are from Sweden. Thinking how lucky that I lived during this time so I got to see them live plenty of times”.

Kent breakup: Monday morning kind of news.On my playlist since first days in Sweden.Can't have one without the other https://t.co/NdlMt5fxMx

Woah, kent is disbanding. It's always a sad day when great bands go to rest. One of Sweden's greatest. pic.twitter.com/Zhp36BdMss

Half of Sweden, myself included is going to suffer from some kind of post traumatic Kent depression because of this.

Those hoping for a last glimpse of Kent on stage will need to join the long virtual queue for tickets when they go on sale on March 19th.
The band is set to tour in Norway, Denmark and Sweden between October and December.