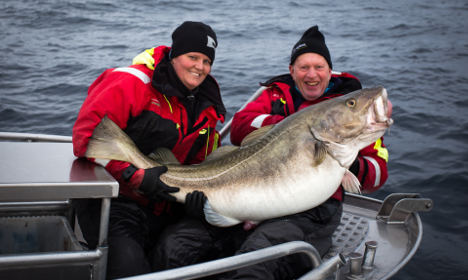 Marica Eriksson (left) and her dad Mikke with the fish. Photo: Johan Mikkelsen/North Sea Angling
Weighing 38 kilos, the record-breaking discovery was made while Marica Eriksson was on a week-long fishing trip with her father to the island of Sørøya in the far north of Norway.
She told The Local that she was delighted with the find and shocked by the media attention she was grabbing in the Nordics after photos of her catch went viral.
“It's very fun to have caught a big fish like that,” she said.
“I felt it would be a big fish [from the way it was pulling], but I didn't realize it would be that big until we came into the harbour!”
The catch turned out to be the heaviest cod reeled in by a woman for 46 years. However Eriksson said she was yet to celebrate.
“I haven't partied much, I just enjoyed the catch (…) But I am gonna take it to my home and eat it.” Marica Eriksson (left) and her dad Mikke with the fish. Photo: Johan Mikkelsen/North Sea Angling
Eriksson said that she was new to fishing in Arctic waters, having only visited the region once before last year. She is more used to looking for catches in warmer climes closer to her home in Uddevalla in western Sweden.
The Swede explained that she was flying back on Tuesday and had already cut up the fish in preparation for the journey.
However, fellow travellers won't be in for a smelly ride, thanks to a high-tech waterproof storage container designed to allow fishing fans to put their rewards in the hold.
“We have a special ice bag for a trip like this so you can take some fish home,” she said.
However with typical Swedish modesty, Eriksson claimed that it hadn't really sunk in that she had earned a place in the record books.
“I honestly haven't thought about it!” she told The Local.
Fishing is among the most popular hobbies for Swedes, with official statistics released in 2014 suggesting around one in ten residents enjoy the sport.