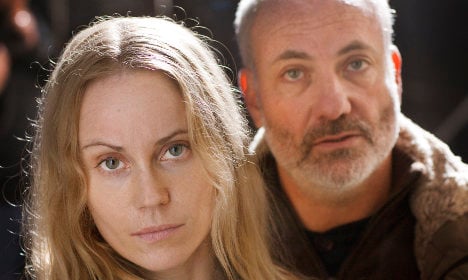 Sofia Helin (left) who plays Saga and Kim Bodnia who starred as Martin Rodhe in the first two seasons. Photo: Ola Torkelsson/TT
The man behind one of Scandinavia's most successful cultural exports in recent years made the comments in an interview with a Norwegian newspaper, published over the weekend.
“Everyone is very busy and they need space in their calendars to do it,” Rosenfeldt told Dagbladet, referring to the show's star cast.
“But it's going to be realized. I can almost promise it, but I cannot say when. We must try not to wait too long, it will probably not be in 2017 but maybe in 2018.”
Speculation about a fourth season of the show, based around Swedish detective Saga Norén (played by Sofia Helin), has been rife since the finale of the last series.
The drama director for Swedish broadcast partner SVT Christian Wikander said in November that Helin and other key players were “talking about a possible season four” and said that a decision would be made this spring.
His comments came after a poll of almost 7,000 SVT viewers showed that 93 percent were in favour of the series continuing.
However Helin later wrote an open letter to British fans suggesting that her time playing Norén was over, describing it as a “vice gripping my body”.
Social media sites and Nordic fan forums were swiftly full of speculation about whether or not her original co-star, Copenhagen-born actor Kim Bodnia could make a return as Danish detective Martin Rodhe, in the fourth series, in the wake of Dagbladet's latest interview with Rosenfeldt.

Wait, what? Kim Bodnia might return if there will be a series 4 of #thebridge? Awesome. https://t.co/A8doBkPYF7 pic.twitter.com/PQznrQXD1h

The star quit after the second season because he did not like the way his character developed. He recently suggested that anti-Semitism in southern Sweden played a role in his decision. In the same interview, with Israeli media, he did not however rule out making a comeback if he was offered a return and liked the script.

Thure Lindhardt played Norén's Danish sidekick Henrik Sabroe in the third series of the programme, and was also a hit with viewers.