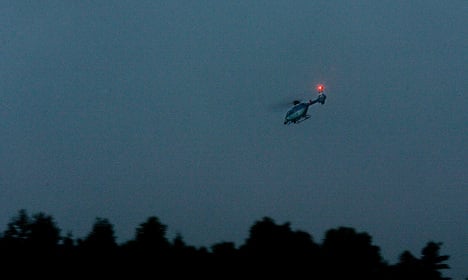 A police helicopter like this one was used during the search. Photo: Björn Larsson/TT
The teenagers were on a moped in Gothenburg when they were hit by a passing car and then forced inside it, police told Swedish media.
A huge search operation was swiftly launched, including a police helicopter tasked with scouring the city from above.
Detectives later traced the boys to a residence in Mölndal, with three men arrested during the night.
“They are being interrogated and arrested for assault and kidnapping,” police press spokesperson Jenny Widen confirmed to the TT news agency on Monday.
“I cannot go into what has been said during questioning, it is an ongoing investigation,” she added.
However Robert Edh, the region's police chief, told the Gothenburg Post that a number of items had been seized from the property where the young boys were found.
Mölndal is an town just south of Gothenburg and is home to around 40,000 people.
It made global headlines in January when a 22-year-old woman who worked at a home for refugee children in the area was stabbed to death by one of its residents.