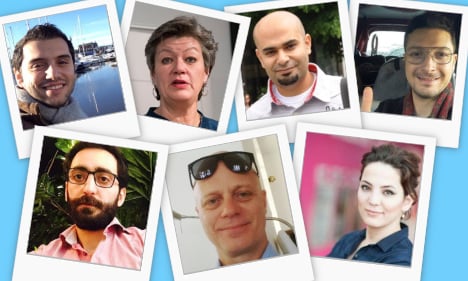 The Local Voices is in constant contact with people who have direct experience with integration in Sweden.

And no matter whether we talk to newcomers trying to get used to a new life in Sweden, Swedes who volunteer or work with organizations involved in various integration initiatives, or civil servants – everyone has plenty of questions about what Sweden is doing to manage integration.

As questions kept coming in, we thought it made sense to pass them on to someone who knows a thing or two about the issue.

So we rang up Minister of Employment Ylva Johansson and asked a few questions on behalf of newcomers and Swedes alike.

Johansson was recently granted extra authority by the government to coordinate Sweden’s work with refugees, including creating a more complete picture of how newcomers establish themselves in Sweden.

“Our goal is be able to handle all these challenges and ensure that, when we are faced with all of this, we make sure we have a strategic vision to ultimately build a stronger Sweden by avoiding segregation and avoiding having gaps grow between groups of people,” she tells The Local Voices.

“We want to push this issue higher on the agenda and make the right decisions for the future of the country.”

Below are the people who had questions for the minister, followed by her responses.

Q: If the employment protections for a permanent employee are so strong that an employer thinks 1000 times before employing someone and then mostly ends up choosing the "safest choice" (Swedes), why don't you reduce such protections for newcomers (at least for two years or so), so employers would maybe feel more willing to ‘dare’ to employ newcomers?

A: We are really doing a lot. However, I think Imad is wrong about the obstacles – it’s not about strong employee protections. The problem is discrimination; it’s about the Swedish Public Employment Service (Arbetsförmedlingen) not being good enough at matching people with the right jobs; and it’s about not having the opportunity to show what you can do through an internship in the workplace.

So I really don’t agree that worker protections are the obstacle. An employer may say that, but that’s not the real obstacle. Employers who simply don’t want to hire newcomers often find something else as an argument against it.

And overall, my sense is that most employers are positive to newcomers. Of course this isn’t 100 percent. I think the hesitation is often related to the perceived difficulty in evaluating newcomers’ knowledge and skills.

Q: Currently there doesn't seem to be effective cooperation between Arbetsförmedlingen, Migrationsverket, municipalities, and other agencies to help get educated refugees into the job market quickly. What are your plans to make a better and a more direct chain between different public agencies and the job market so refugees can get jobs faster?

A: We have new initiatives that are putting local authorities and Arbetsförmedlingen together that give them more freedom to work more closely together. This increased cooperation is meant to make it easier for both young people and newcomers to get into the labour market.

And that’s a big part of my new role – to ensure the different national public authorities work better together and result in few different contact points for newcomers.

Q: Ever since the ‘etableringslots’ programme was canceled in April 2015, many Arbetsförmedlingen offices around the country still lack staff to provide this type of service. What are your plans to solve this issue?

A: We are really stepping up activity in this area by offering other paths instead of ‘etableringslots’. One is the ‘Fast Track’ programmes where we’re investing huge amounts of money in evaluating skills and credentials. We’re also doing a lot in terms of education and training, as well as initiating an in-house ‘etableringsresurs’ [employees at Arbetsförmedlingen who are tasked with helping newcomers into the labour market].

The ‘etableringslots’ system put in place by the previous government used a lot of private companies that operated in the grey or black market sectors. Sure there were some good players but many didn’t offer the services they should have and we couldn’t continue spending taxpayers’ money on a system where it was used in the wrong way.

Q: Why is the focus only on immigrants failing to integrate rather than the fact that Swedish employers don’t want to hire people with foreign backgrounds? Often it seems that origin matters more than competence. Isn’t the case that we don’t really want them here? That we just want to play the role of the good guy whose door is open for those in need?

This is partly true – but every time you start looking for one solution for getting 160,000 people into jobs, I think you will fail. The refugees in Sweden have diverse backgrounds; some have degrees and professional knowledge that is immediately applicable to the Swedish labour market and we must help them into jobs faster. But it’s also the responsibility of the employer to not discriminate.

However, there are also many who have come to Sweden with little or no education; who can’t read or write and they won’t get hired because Sweden has a very high ‘lowest level’ of jobs. And it’s these people whom politicians have a responsibility to help. We need to change things. And that’s very challenging and what I’m fully occupied with in my new role.

Occupation: Student of economics and communication

Q: You and other Swedes talk about how much you want to integrate us – if that’s the case, then why don’t you employ us so we can integrate faster? Why is language still seen as a barrier to hiring – when in reality, it’s easier to learn a language while working rather than in a classroom?

That’s true. Sometimes language is used as an obstacle – even though it’s not really an obstacle – by companies that really just don’t want to hire newcomers. But in many professions, English is fine, or even other languages. It can be easier to learn Swedish in the workplace, so getting people into jobs faster is important. That’s part of the thinking with Fast Track, which comes from discussions with other social partners [labour unions and employer organizations, the foundation of the ‘Swedish model’ of labour relations].

Employers agree to offer employment and internships, while unions then set up a mentoring programme with existing union members so newcomers can learn more about how everything works. It also integrates learning Swedish either with classes or online, making it easier to combine learning the language with employment.

Q: Are recent changes to Sweden’s integration laws – such as tighter border controls and rules that make it harder for refugees enrolled in SFI classes to earn a salary at the same time – about changing how Sweden is perceived abroad, or a result of concerns about a lack of resources in the country to deal with the issue?

A: Kind of both reasons, actually. We do lack the practical resources – housing, schools, teachers, etc. We’ve taken in children and teenagers that have required us to create 3,000 new school classes – which means we need to build a lot more schools and train a lot more teachers. Our population grew by 1.6 percent due largely to asylum seekers and immigrants [in 2015 Sweden had the biggest year-on-year population increase ever, with immigration accounting for 77% of the growth, according to Statistics Sweden].

So that unprecedented increase has resulted in a lack of practical resources, from housing to schools to healthcare. And that’s why we can’t continue having such a large number of people coming here year after year – it’s stretching our system. So yes, that is one of the main reasons, and we need to focus our energy on the needs of people who are already here.

We’ve been arguing for a system of solidarity across the EU, but unfortunately the results of that have been quite negative. Countries have been closing borders instead of sharing responsibility. If there was a fair distribution of asylum seekers across the EU, it wouldn’t be a problem. But you can't just rely on Sweden and Germany to do everything. So we are also sending a message to the other EU countries about the need to share responsibility.

When I talk to voters in Sweden, they tell me they thought we joined the EU to solve common challenges together, and that it was a union based on common values. But they often ask, where are those values now?