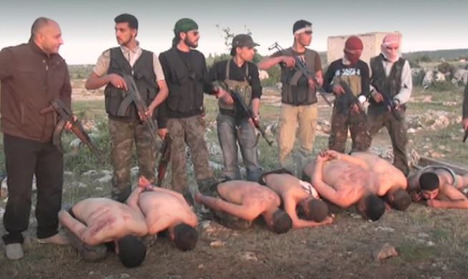 Haisam Omar Sakhanh was arrested on Friday and remanded in custody in Örebro in central Sweden, officials confirmed on Tuesday.

He was detained on Monday night as part of an investigation into acts committed in the province of Idlib but the prosecutor gave no details of the alleged crimes.

The Swedish daily Expressen said he is suspected of having participated in the execution-style murder of seven men in Idlib in April 2012.

A graphic video, originally published by The New York Times in 2013, graphically shows the execution of the men with their hands tied behind their backs. It is alleged that Sakhanh was one of the executioners.

The clip, which was also posted by Expressen, shows a man suspected of being Sakhanh holding a Kalashnikov assault rifle.

The video below contains graphic scenes some viewers may find disturbing

The men are bent forward on the ground and at the request of a leader, they were executed.

“Still, there are rules that must be followed according to international law. You can't just do any destructive or murderous thing.”

Sakhanh was granted official residency in Sweden on October 30th 2013.

Before moving to Sweden, he had lived in Milan, Italy, since 2002, where he worked as an electrician, according to Italian media reports.

After the civil war in Syria broke out in 2011, Sakhanh became a leading opposition figure who actively protested against the Syrian regime's abuses, said Italian newspaper Corriere della Sera.

In February 2012, he was arrested by Italian police after a demonstration at the Syrian embassy turned into a riot. Exiled Syrians stormed the embassy and guards were beaten, according to the newspaper.

Sakhanh was released by police after questioning and then disappeared.