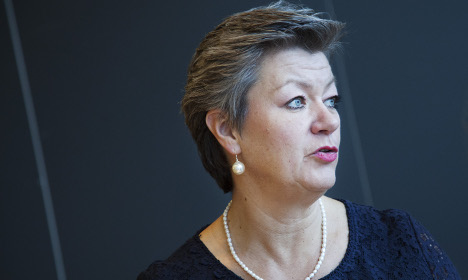 Sweden's Minister for Employment, Ylva Johansson. Photo: Stina Gullander/TT
The Social Democrat politician made the comments as she was quizzed by refugee readers in Sweden for The Local's new channel, The Local Voices, a site which gives a fresh voice to newcomers in Sweden.
“The problem is discrimination,” she said, when asked about why some companies shy away from hiring foreign workers.
“It’s about the Swedish Public Employment Service (Arbetsförmedlingen) not being good enough at matching people with the right jobs; and it’s about not having the opportunity to show what you can do through an internship in the workplace.”
However Ylva Johansson argued that she felt that “most employers are positive to newcomers”.
“Of course this isn’t 100 percent. I think the hesitation is often related to the perceived difficulty in evaluating newcomers’ knowledge and skills,” she concluded.
Read Ylva Johansson's full answers on The Local Voices
The minister's comments come off the back of recently released statistics which suggest that the jobless rate for foreign-born Swedes is set to rise.
Sweden's Public Employment Service predicted in December that 60 percent of unemployed people living in Sweden will be foreign-born by 2017, while the jobless rate for Swedes is likely to shrink.

However, other research, including a key report by banking giant Nordea has estimated that Sweden's record intake of refugees could boost the country's GDP in the next few years, with those who do manage to land a job helping to plug skills gaps on the Swedish labour market.

Johansson told The Local Voices that Sweden's government was working on a range of initiatives designed to improve employment prospects for foreigners.

“Our goal is be able to handle all these challenges and ensure that, when we are faced with all of this, we make sure we have a strategic vision to ultimately build a stronger Sweden by avoiding segregation and avoiding having gaps grow between groups of people,” she said.

“We want to push this issue higher on the agenda and make the right decisions for the future of the country.”