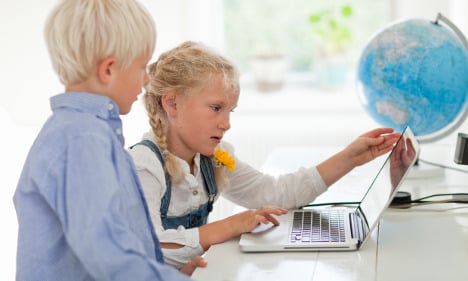 Swedish siblings surfing the internet. Photo: Ulf Huett Nilsson/Image Bank Sweden.
Fibre-optic broadband, which uses plastic or glass cables to speed up the transfer of data, is becoming increasingly available across Sweden, according to the research, which was commissioned by the Swedish government.
Access to speeds of 100 megabits per second has risen by seven percentage points over the last year, with 61 percent of households now able to use the faster broadband. A further 10 percent of the population are within 50 metres of a fibre-connected building, suggesting that the network could be expanded with minimal investment.
“Sweden is seeing a strong development thanks to investment in broadband from a range of players and a clear demand from customers. What is particularly gratifying is that this expansion is taking place in all parts of the country,” said Catarina Wretman, Deputy Director General of PTS.
However the report highlights that rural areas still lag behind Sweden's urban centres. While fibre optic access in the countryside has risen by eight percentage points since the end of 2014 (more than the national average), only 21 percent of homes in these regions are able to use the service.
The Swedish government has pledged that 90 percent of all homes and businesses should have access to broadband speeds of 100 megabits per second by 2020, much higher than the European Union's goal of 30 megabits per second.

Swedish students online. Photo: Sofia Sabel/Image Bank Sweden
The Nordic country has long been a pioneering high technology nation and was recently ranked third in Europe for digital performance by the European Commisssion, just behind neighbouring Denmark and Norway.
The Swedish capital, Stockholm, is set to be one of the first cities in the world to have the 5G mobile network in 2018.
However some experts have warned that Sweden needs to work harder to ensure its progress does not stall as other countries scramble to get ahead in the tech race.