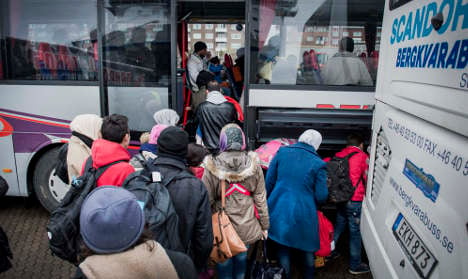 Refugees are already known to be at increased risk of post-traumatic stress disorder (PTSD) and depression, but the study, published in the BMJ medical journal this week also showed a higher risk of psychotic disorders such as schizophrenia.

Conducted by researchers at Sweden's Karolinska Institute and University College London, the study used data from 1.3 million teens from the Swedish national register and followed them for 13 years.

The survey group included Swedes with two natural citizen parents, refugees and other migrants, with many originating from the Middle East and north Africa, sub-Saharan Africa, Asia, Eastern Europe and Russia.

The study found that for every 10,000 people, there were approximately four new diagnoses of schizophrenia or other psychotic disorders among Swedish-born people per year.

But among non-refugee migrants that figure was eight, and 12 among refugees.

The findings applied to both men and women, but was most pronounced for men.

“The dramatically increased risk among refugees shows that life events are a significant risk factor for schizophrenia,” Anna-Clara Hollander, the study's lead author from Karolinska's Department of Public Health Sciences, said in a statement.


Sweden's Karolinska Institute, where some of the research was carried out. Photo: Tomas Oneborg/SvD/TT

The disease usually starts during the transition to adulthood and is thought to be provoked by genetic as well as social circumstances.

Traumatic events such as persecution, conflict or natural disasters contribute to the risk of developing disorders, Hollander said.

“We know that refugees are a vulnerable group, facing many social, economic, physical and mental health challenges in their lives,” said co-author James Kirkbride from University College London Psychiatry.

The study, he said, highlights “the need for specialist care and support. In most countries refugees undergo standard health checks, but mental health issues can be overlooked”.

The research was conducted using Swedish national registry data up until December 2011, so it does not include recent migrants.

But there is nothing to suggest that people displaced by recent conflicts will be any less vulnerable than those granted refugee status in the past, according to the study.

Sweden took in a record batch of asylum seekers in 2015, receiving 163,000 applications.

However it has seen the number of migrant arrivals fall sharply since it introduced police border controls in November, followed by passenger ID checks at ferry terminals and Copenhagen Airport's train station at the turn of the year.