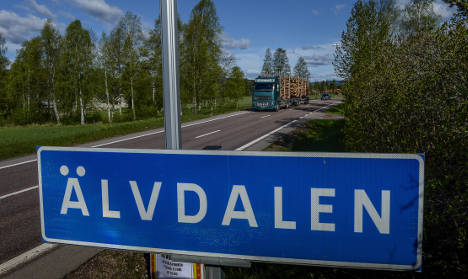 Elfdalian is only spoken in Älvdalen in northern Sweden. Photo: Jonas Ekströmer/TT
While its name might conjure up images from Game of Thrones or Lord of the Rings, Elfdalian is a real language that is believed to date back to Viking times and is in danger of becoming extinct.
Fewer than 60 children can currently speak Elfdalian, but politicians in the remote town of Älvdalen in central Sweden have this week voted to try to save it, by setting up a new preschool where it will be taught. Pupils who begin learning the language aged six will keep it as part of their curriculum until they turn 18.
“The decision was made yesterday that they will start to build the preschool,” Lotte Andersson, a press spokesperson for the municipality, confirmed to The Local on Wednesday.
The kindergarten is scheduled to open no later than September 1st. In addition, the municipality has agreed to take a range of other steps designed to strengthen and preserve the language, for example by using it more frequently on posters, signs and advertisements.
Peter Egardt, the city's mayor, said in a press statement that the decision demonstrated that officials were aware of their responsibility to “get a new generation to speak our unique language, this giving the language more of a chance to survive in the long term”.
He praised similar initiatives designed to preserve the Welsh language in the UK and in Sami languages in Norway.
Previously regarded as a Swedish dialect, leading linguistics experts only started to consider Elfdalian (or Älvdalska as it is known locally) as a separate language around a decade ago.
Yair Sapir, Associate Professor of Swedish Language at Lund University in Sweden, told The Local he was delighted by the move to open the new preschool, which was first mooted last May.
“This is a historical decision that might reverse the situation of this threatened language in the right direction,” he said.
“I think it will have a great impact because so far what we have seen is that children who grow up with Elfdalian at home, when they come to school and they don't get any input in Elfdalian, they conceive Elfdalian as unimportant and they switch over to Swedish,” he said. Älvdalen in northern Sweden. Photo: Jonas Ekströmer/TT
Sapir dedicated his career to studying Elfdalian after initially spending two weeks living in Älvdalen in 2002 and eventually teaching it to himself.
“It is important to preserve it [in Älvdalen] because this is the only place where it is actually spoken. For linguists it's very fascinating. It has a mixture of very archaic features and very innovative features (…) and we can see some aspects which have been preserved in Elfdalian which have died out in all other Scandinavian languages.”
“We can go back 2000 years in time,” he added.
Despite the fact that the language is not used in workplaces in Älvdalen or anywhere else in Sweden, Sapir argues that those learning it from a young age will reap the benefits in future.
“Children that are bilingual are rewarded because they see things from different prespectives. This brings them better results in other school subjects and makes it easier to learn other languages.” Princess Sofia (left) and Prince Carl Philip visiting the town last year. Photo: Jonas Ekströmer/TT
Älvdalen is home to 2,500 people and is where Sweden's Princess Sofia grew up.
The royal, who wed Prince Carl Philip last year, returned to the town last October for the couple's first official engagement as a married couple. The pair are expecting a baby by the end of April.
IN PICTURES: Swedish princess returns to her forest roots