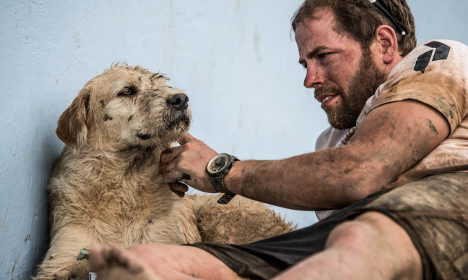 Arthur has been living with dad-of-two Mikael Lindnord and his family at their home in northern Sweden since they brought him over from Ecuador more than a year ago.

The former street dog today enjoys sleeping in front of the fireplace and going on long walks. It is a far cry from his life in Ecuador's jungle, where he and Lindnord first met after the Swede threw him a meatball – the start of a love story which melted hearts worldwide.

Arthur's incredible journey from Ecuador to Örnsköldsvik is now set to be released in English as a book on May 19th. A Swedish version will come out in September later this year.

Co-written by Lindnord and British writer Val Hudson, 'Arthur – the dog who crossed the jungle to find a home' will depict the “story of Arthur, who walked out of the jungle one day and didn't stop walking until he found a home”, according to UK publishing house Two Roads.

“Their story is a testament to the remarkable lengths both humans and animals will go to: for success, for hope and for love,” added the description on the website. After months of paperwork, Arthur was finally able to move in with his adopted family in March last year. Lindnord told The Local at the time that global media attention was so great he had been forced to hire a press secretary for the dog to field interview requests.

A spokesperson for the publishers said on Thursday that they were expecting a similar wave of global interest from Arthur's fans – particularly as the dog himself is set to go to the UK ahead of the international launch.

“The dog and his owner are coming over to do publicity. We're still finalizing the exact dates, but I've been told they're definitely coming,” Yassine Belkacemi told The Local.

Meanwhile, Lindnord hit the headlines in Sweden this week after the 39-year-old told Swedish media he is going to retire from extreme sports. But he said the tale of Arthur was far from approaching its final chapter .

“You never know. It's still not clear if it's going to become a movie or not. But no, I think this story is far from over,” he told Sweden's public broadcaster SVT.