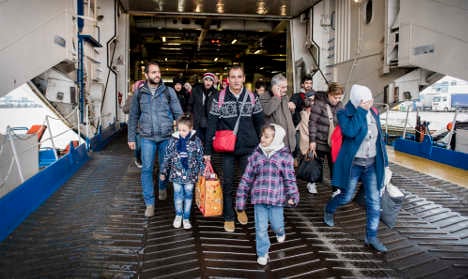 Refugees arriving in Trelleborg, southern Sweden, last year. Photo: Marcus Ericsson/TT
Sweden's Prime Minister Stefan Löfven wrote a letter to the European Commission last November, asking for some of the record number of refugees arriving in the Nordic nation to be distributed to other countries in the European Union.
However a draft settlement set to be debated by EU leaders on Thursday, is understood to rule out the possibility of asylum seekers being moved on as part of the EU's relocation programme, designed to help overstretched states.
According to Sweden's Svenska Dagbladet newspaper, Löfven told fellow EU leaders on Wednesday that this section of the settlement, which largely focusses on the role the EU wants Turkey to play in the future, was “not optimal for Sweden”.
However he added that he would not oppose it because “the most important thing now is to stop the smuggling of human beings into Europe and move from a dangerous and uncontrolled situation to a safe one”.
The proposed EU plan is designed to stop people entering the European Union illegally by boat, with all refugees arriving from Turkey to Greece set to be sent back. For each Syrian returned, another Syrian in Turkey would be resettled within the European Union.
Leaders are debating the idea in Brussels, with Turkey's Prime Minister Ahmet Davutoglu due to join their discussions on Friday. It has previously been suggested that Turkish citizens will get visa-free travel to Europe from later this summer as part of the deal.
Sweden took in an unprecedented 163,000 asylum seekers in 2015. In November Löfven argued that his country had taken on an “unreasonably large responsibility in comparison with other countries in the EU” and argued that this had left Sweden in “a very tight position”.
Since then, the Scandinavian country has introduced border and ID checks and tightened its asylum rules, after municipalties said they were overwhelmed with the influx.
New arrivals have dropped from more than 10,000 a week back in October to around 500-600 in the past seven days.