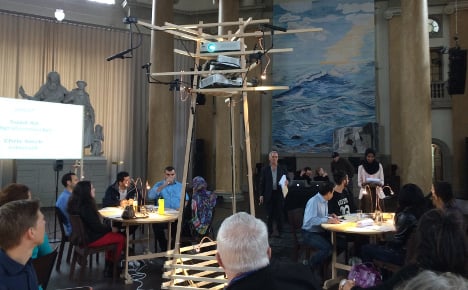 The scene at the first MIG Talks discussion. Photo: The Local

Omar, a 28-year-old academic with a philosophy degree, now lives in suburban Stockholm. He was one of ten people who shared their stories on Monday at an event in Stockholm.

The discussion also included representatives from more than a dozen different stakeholder organizations and public agencies who are also part of MIG Talks, a joint communications effort initiated by the Swedish Migration Agency (Migrationsverket) that features a series of discussions, events, and other communications initiatives to be held throughout 2016

The aim of MIG Talks is to foster better knowledge and understanding about migration to Sweden by creating a forum for exchanging information, experiences, and perspectives.

By sharing individual stories and views from both newcomers and different stakeholders, MIG Talks can contribute to a more nuanced and inclusive public discussion about migration and the people affected by it.

All ten people who spoke at Monday’s MIG Talks event came to Sweden seeking protection from persecution in their home countries – and all ten discussed the challenges of dealing with different labels and assumptions in their new country.

“I feel like others always put me in a box – ‘gay’, ‘Syrian’, ‘refugee’ – and I’m always trying to climb out of those boxes,” said Logal Kako, a self-described literature buff who fell in love with the English language after reading Shakespeare.

Jihad Eshmawi, also from Syria, compared his boat ride over the Mediterranean to a funeral marking the end of a previous life, but which – in that moment – had no promise of an ‘afterlife’ of safety in Europe.

“I’m a totally different person now. Those seven days at sea changed my view of life,” he said. He was quick to add, however, that he could do without people’s sympathy.

“It’s not at all comforting to get sympathy. It feels belittling,” he added.

Meanwhile, Hewan from Eritrea described her horror and confusion about what Europe had to offer when she ended up in a prison in Greece, repeating the theme that she would never be the same person again.

“I’m a different person, but I’m a survivor. I carry on,” she said.

The discussion also touched on people’s experience in a new country and how they dealt with people in Sweden who had varying degrees of understanding about where they’d come from.

“I had someone ask me if we had trees in Syria,” said Perwin Mustafa, who now lives in Borlänge in central Sweden.

May Samhouri, also from Syria, told of debating with a friend who suggested May should no longer wear a headscarf now that she lived in Sweden, to which May responded that her participation in Swedish society had nothing to do with an item of clothing.

Logal chimed in on the theme of combining customs and traditions from more than one country.

“Sure, introduce me to the new culture, but don’t kill my old one,” he added.

Editor's Note: The Local, through The Local Voices, is a participating partner in MIG Talks.