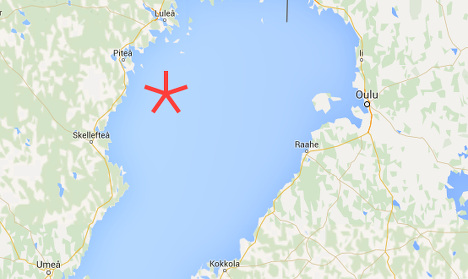 The earthquake took place around 45 kilometres off the coast. Photo: Google Maps

The earthquake was measured as 3.9 on the Richter scale, although the European-Mediterranean Seismological Centre (EMSC) measured the quake at 4.2.

According to the Swedish national seismic network, the Gulf of Bothnia “has relatively high seismic activity but has not experienced a quake of this size in the last 100 years.”

According to northern Swedish regional newspapers, there were no injuries and only minor damage to property has been reported.

Paul Connolly, The Local's northern Sweden correspondent, who lives in the affected area, said that the earthquake struck at around 10.55pm.

“The whole house shook but I thought it was our old washing machine going a bit mad in the basement. However, I know people who were out at the time and they said the ground vibrated beneath their feet for up to 30 seconds. That would have terrified me.”

Another northern Swede from Piteå told the EMSC that, “The whole house trembled and was shaking for a good 30 seconds. It was a dark, rumbling noise. After that it slowly wore off. I have felt earthquakes before, but never this heavy and long. Scared the crap out of both me and the cat!”

Another witness from Umeå said, “It felt like a tractor had driven into the house. The house swayed and the roof creaked loudly.”

Earthquakes that are powerful enough to be felt are a rare occurrence in Sweden. The country sees around three earthquakes measuring around 3.0 in magnitude scale every year and most of them go unnoticed.

In September 2014, parts of central Sweden were hit by a quake measuring 4.1 on the Richter scale.

Seismologists said they believed it was the strongest the country had seen in a century, since 1904 when a quake measuring 5.5 on the scale shook the area by the western Koster islands.