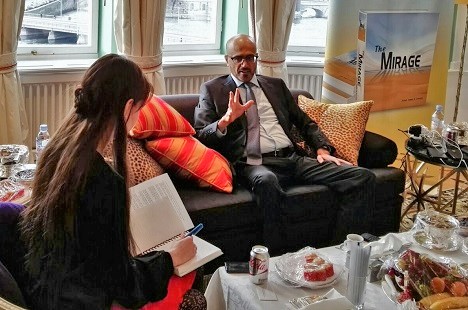 Dr. Jamal Sanad al-Suwaidi in an interview with The Local.

Sweden is one of the most secular countries in the world. It’s also the EU nation which, per capita, takes in the most refugees from the Middle East.

And as “attacks” of various kinds like those in Paris and Cologne make the world ever warier, Sweden is facing a challenge: How much can the country actually take?

“I think European countries have been too soft, and they are paying the price for it,” says Abu Dhabi-based scholar Dr. Jamal Sanad al-Suwaidi.

Al-Suwaidi is Director General of the Emirates Center for Strategic Studies and Research (ECSSR), as well as the author of numerous articles and books. His latest work, The Mirage, focuses on the phenomenon of radical political Islam, its causes, and how it should be addressed.

In the book, he argues that using intellect and not just military power is critical to overcoming extremism. The very title of the book is a metaphor for the deceptive remedies radical religious groups claim can solve contemporary social problems.

He describes the current political climate in the Middle East as similar to Europe in the Middle Ages – a time when religion ruled and those who spoke out against the church were persecuted.

But the Western world has been naïve in handling the phenomenon, he says. And the problem is deeply rooted.

“They have let it go on for too long,” he remarks. “When the Soviet-Afghan war began, the Western world supported the rebels. And it came back to haunt them. It’s time to wake up.”

Back when the Soviet Union invaded Afghanistan in 1979, the United States supported rebel fighters, the Afghan mujahedeen – factions of which later become the Taliban. And when the Muslim Brotherhood struggled to gain power in Egypt in 2011, much of the Western world supported what al-Suwaidi describes in The Mirage as their “superficial democracy”.

He concludes it’s a mistake to support any religious political faction over another – because they’re all connected.

“Dividing this phenomenon just makes them stronger,” he tells The Local.

“I don’t think there really is a separation between the Muslim Brotherhood and Isis. If you look back, Isis didn’t emerge until after 2013, when the Muslim Brothers in Egypt were demised. And they both operate by ‘kill now, discuss later’. There is no difference. They might have different tactics, but it’s the same ideology.”

While al-Suwaidi, who received his PhD in political science from the University of Wisconsin-Madison in 1990, uses his pen as a sword to combat extremism with The Mirage, that doesn’t mean he is against using force when necessary.

Speaking specifically about Isis, the author argues the entire world must unite against the terrorist group, utilising not only bombs but ground forces to wipe them out and stop the killing of innocents.

As the European nation which takes in the most refugees per capita, how can Sweden be sure that terrorists are not among them?

“Sweden has one of the largest Muslim communities in Europe, and must play a major role in combatting extremism,” he says.

For instance, proposes al-Suwaidi, Sweden could promote the creation and implementation of an international database that could be used to document suspected terrorists, as well as those at risk of radicalization, and thus make it easier to prevent them from entering Europe in the first place.

But what about the battle at home?

Sweden's intelligence service Säpo has identified 292 people as having left Sweden since 2013 to join Isis. What is the lure, and how can the flow be stopped?

“It’s very difficult,” al-Suwaidi admits. But part of the solution is a three-fold intellectual counterattack, he explains.

Mosques in particular, he continues, should be carefully monitored controlled.

“The mosques in Sweden and Europe are not always expressions of religious freedom,” he says. “They can be places to learn terrorism.”

Freedom of religion must still be respected, and mosques should be retained as places of prayer – “but they cannot become schools” where radical ideologies are taught and spread.

“There is a difference between religious freedom and recruiting killers.”

While some would view state intervention in a mosque as an invasion of privacy, al-Suwaidi argues that at this point, security is far more important.

“The relationship between security and privacy is abused by terrorists,” he says. “Ask the people in Paris – do they prefer privacy over security? At the end of the day, the killing just needs to stop.”

Nations should not be too accommodating when accepting citizens of another country, the scholar says. Privacy, religious freedom, and culture are all important in their way, but also relative – and those who move to a new country should be ready to assimilate.

“Loyalty to a group other than your country is a massive problem,” he remarks. “The whole of a nation state depends on everyone believing in it. If they are loyal to someone else – well, that’s a problem.”

Swedes tend to be meek about imposing their own culture and values, he adds, but even tolerance can go too far. In his eyes, placing demands on immigrants can help combat extremism by helping them get more rooted in their new country.

“I think if Sweden keeps trying to overcome the concept of nation state, they will pay for it in the future,” he muses. “Those who come to Sweden must be loyal to Swedish values. If they’re not willing to become part of the Swedish community, they shouldn’t come.”

The same applies to refugees seeking new homes in Germany, the UK, or any other nation, and al-Suwaidi argues that citizenship should be based upon values and identity – not how long you have been in the country.

“You cannot have someone from Iraq come live in Sweden and be loyal to Iraq, for example,” he says. “Who are they loyal to? Sunni? Shiite? Kurdish? The Arab world? Isis? You have to be Swedish.”

In practice, that means learning the Swedish language and respecting Swedish laws and values.

It’s not a matter of disrespecting other cultures, al-Suwaidi explains; rather, he sees increased cultural assimilation as a tool to help overcome extremism.

“If you’re proud of your heritage, okay, great,” he says. “But at the end of the day, you must be Swedish, with Swedish values. Otherwise you should leave.”

Al-Suwaidi, who is a Muslim himself, adds that the struggle against radicalism is not limited to Islam.

“Extremism happens everywhere,” he says. “When Trump said no Muslims should be able to enter the US, that’s extremism. When Hindus kill Muslims for killing a cow, that’s extremism. No one has the right, in Islam or any religion, to kill people. I don’t know how they justify this.”

The trick is to stifle extremism – in any form – in its infancy, never allowing it to reach the proportions where it forces thousands from their homes.

“It’s a lifelong battle,” al-Suwaidi acknowledges. “You cannot get rid of extremism entirely. But we can teach tolerance, and make it an international value.”

This article was produced by The Local and sponsored by the Emirates Center for Strategic Studies and Research.