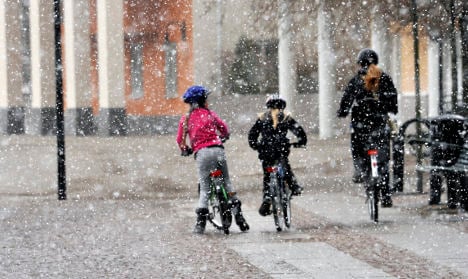 Don't believe us? This photo was taken in Stockholm in April two years ago. Photo: Hasse Holmberg/TT
It looks like it will be a damp public holiday weekend for millions of Swedes, with meteorologists predicting an unsettled few days that could involve rain, sleet or even snow for some.
“Just when the precipitation is coming in and how much there will be and so on is a bit uncertain,” forecaster Marie Staerk told Sweden's Metro newspaper on Monday.
But she said that a low pressure front looked set to bring the wet weather on Thursday and said it would likely “dominate much of the Easter weekend”.
Optimists might however want to hang on to her subsequent comment that “in between, there will be little gaps in the clouds and the chance of sun”.
Stockholmers are set to be among the luckiest residents, with sunshine and temperatures of 11C expected on Saturday. Both Malmö and Gothenburg are expected to be damp with highs of 10C.
Despite spring officially showing its face in several parts of the country earlier this month, March has already been drizzly or snowy for many Swedish residents.
The west of the country experienced such a severe cold snap that weather warnings were issued three weeks ago.
Even Uppsala, just north of Stockholm, was covered in sleet and snow over the weekend.

Snowy day in #uppsala! What a beautiful, and cold, welcome back! #snow #sweden #weather #fb

Commuters in northern Sweden have already experienced a snowy start to this week, with the white stuff falling in parts of Jämtland and southern Norrland.