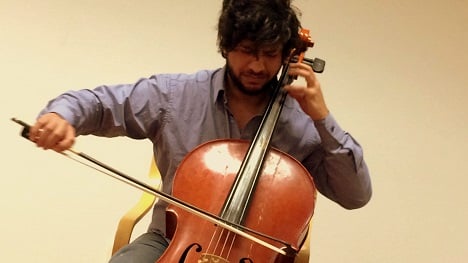 For Abboud it’s not theoretical. It happened. Only it was his country which was on fire, and the escape route was a dinghy from Turkey to Europe.

“When I saw people carrying the dinghy across the beach, I saw it as a tomb,” Abboud recalls. “I was sure something would happen.”

As it happens, he wasn’t able to bring his cello. The driver requested an extra $1,000 to carry it on the boat. But it’s just as well – as with 46 people crammed into the dinghy, everyone’s baggage ended up tossed overboard.

“The journey lasted two hours. The motor stopped working and there was just mist everywhere. I just thought, ‘For god’s sake, where is the island?’”

The group was eventually rescued by a Spanish volunteer who was able to fix the motor and accompany the group to the Greek island. After that Abboud eventually made his way through the Balkans and up to Sweden.

His childhood seems like it was in another universe entirely.

“When I was young I had many private classes,” he says. “My dad first taught me to play the oud, a classic oriental instrument, and then my mom asked me to play the violin.”

But he soon fell irrevocably in love with the cello, and in high school his devotion led him to seek studies at the Higher Institute for Arabic Music at the Egyptian Academy of Art – leaving Syria as the revolution began.

“I practiced 8 to 12 hours a day,” Abboud says. “I wanted to be ready to enter the Institute.”

Scraping together the money to apply was difficult for Abboud and his family, and the audition was rigorous. But it worked out – Abboud was accepted, and received an incredible 100 percent score on his audition.

But there was a catch: Abboud still didn’t have residency in Egypt.

“If you have no residence your situation is going to be hard. I went to get a certificate of registration from the university, in order to use it for the residence application, and the employee told me I had to pay the ‘foreign’ registration fee in British pounds,” Abboud says.

In short, due to an application deadline mix-up and the complicated rules applying to Syrian citizens, he was required to pay massive extra fees each year – fees which he quite simply couldn’t afford.

“This happened three months after I had started university, and I continued studying the entire year – knowing that I couldn’t take the exams and couldn’t progress,” he says. “So I had no residence permit and no way of completing my studies.”

After that Abboud tried studying in Turkey – where he had heard that Syrians could study for free – but it didn’t work out there, either.

“So I decided to leave,” he concludes. “I took the perilous route with so many others. It was a tragicomic sort of journey.”

The irony, of course, is that he still doesn’t have a residence permit. But here he sits in the asylum centre in Sweden with a smile on his face – for at least he has his cello.

“When I arrived in Sweden I spent almost a month without it, and my skin started to itch,” he remarks. Not being able to play was like going through withdrawal. “It was suffocating.

He asked his mother to ship the cello to Sweden, and eventually she did.

“I told her I didn’t want anything else, not even the residence permit, if I can’t have my cello,” he says. “I dreamed about it.”

When Abboud finally received the instrument in November last year, he was shattered to discover that it was broken. There was a large crack down the back of the cello and a chunk broken off.

“I called my mom and started weeping,” he says. “My instrument is the most valuable thing in my life.”

But Abboud is no stranger to adversity – and once again, he did as he has done so many times before. He picked up the pieces and marched on.

“I bought adhesive tape and fastened the broken part back to the cello’s body,” he says.

The sound isn’t the same, and playing the instrument – like the process of waiting for residency – has become exhausting.

He admits it’s rough waiting so long for the residence permit. But luckily he has the cello – and Abboud is enjoying sharing his love of music with Swedes.

“After playing at a recent event, a Swede told me, ‘Your music goes straight into the heart without any barrier,’” he says.

“I like the idea that our classic oriental music can be beautiful and appealing to people from other cultures too. I’m very excited about that.”