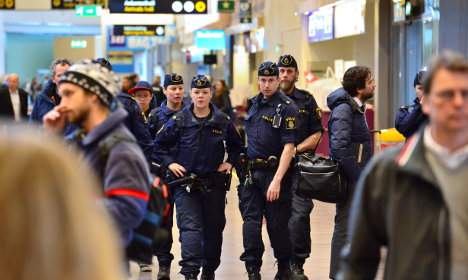 Police at Stockholm's Arlanda airport on the day of the Brussels attacks. Photo: Johan Nilsson/TT

The study focused on 'Preparedness for mass casualty attacks against public transport' and was carried out by Annalie Holgersson, a researcher at Umeå University in northern Sweden.

She analyzed research including a survey by Swedish number crunching agency Statistics Sweden which asked more than 850 police, ambulance and fire service workers how they felt they would respond in a fictitious attack on public transport in Sweden.

More than 60 percent of those questioned said they were unsure about how they would react, with police officers the least sure about their potential responses.

“The results do not show that the actual preparedness is bad, but that the professionals tasked with responding to a disaster scenario feel that they lack both the necessary knowledge and resources to deal with the consequences of a possible attack,” Holgersson told Swedish newspaper Svenska Dagbladet.

“If the differences between the police and the other professional groups in the study – the fire and ambulance services – depends on better self awareness or worse conditions in the police force, that I can't say. Further research is needed,” she added.

GUIDE: What should you do during a terror attack?

However Lina Nitz, president of Polisförbundet, Sweden's union for police officers, said she was not surprised there was low confidence among some staff.

“We need more police officers, there is the key issue. And the force is not fully trained – or hasn't practised enough – to be able to deal with the worst kind of scenarios. Ongoing training is generally neglected because it is the first thing people cut back on in connection with savings measures,” she told the paper.

The research was carried out last year, but the findings were released in Sweden just a day after the deadly terror attacks in Brussels which left three Swedes injured, as well as dozens of other Europeans.

Sweden's national police released a statement on Tuesday saying that it had “strengthened” police presence in the wake of the explosions and was cooperating closely with Swedavia, which operates airports in Sweden; the national security police Säpo, civil contingencies agency MSB and the foreign ministry in order to keep Swedish residents safe.