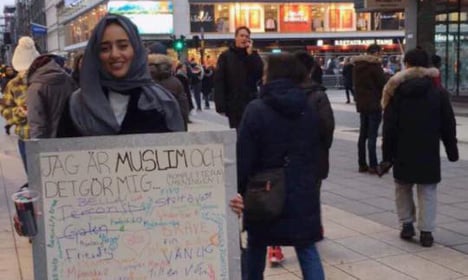 "I am a Muslim and that makes me..." Photo: Yara Othman

Yara Othman, who arrived in Sweden nine months ago, says she has not had an easy ride in the Nordic country, where rising racial tensions have been hitting global media after a year of record immigration.

But rather than being deterred by racism and the voices that shout the loudest, the 18-year-old Muslim went out on to the streets of Stockholm to investigate islamophobia in Sweden for herself.

With camera, pen and a big, blank sign in hand – and nervous jitters in her stomach – she invited Swedes to write their own answers to the following sentence: “I am a Muslim and that makes me…”

“As a Muslim girl who wears the hijab and isn't camera shy, I thought it would be a great idea to do something like this and raise awareness against islamophobia. There aren't many people who do so, so I thought why not do it myself?” Othman told The Local on Wednesday.

Her social experiment gets off to a rocky start. The first person who signs the notepad writes “terrorist” and another writes “crazy”. However, soon other comments begin rolling in. “Friendly,” says one. “Wonderful,” writes another Swede. “Fellow human,” writes a third.

Othman, who says she herself has been on the receiving end of racist jibes in Sweden on a number of occasions, said that although she had not wanted to assume the worst, she was surprised at the reactions.

“I actually had very low expectations and I was a bit worried that things might get out of hand. And I was honestly shocked and overwhelmed with the number of positive comments people wrote,” she said.

Sweden recently tightened asylum rules after taking in an unprecedented 163,000 refugees in 2015. The concept is becoming an increasingly thorny topic in a country formerly famed for its openness, where far-right groups and anti-immigration party the Sweden Democrats have been gaining ground.

However, Othman says she is not worried the country will lose its tolerant views.

“I honestly think that Sweden might one day become the new America. Because it has been so accepting of many cultures and people, even though not everyone in Sweden likes what is happening. And no, I am not worried about xenophobia and I know that we as immigrants have a lot to offer and that the Swedes will acknowledge that soon.”

Othman, who is currently learning Swedish, chose to move to the country to apply for medical school, with her eyes set on the prestigious Karolinska Institute, which hands out the Nobel Prize in Medicine.

“I've lived my entire life in Saudi Arabia. I went to a British International School, so I wanted to get my medicine degree from another country with an even higher education system,” she said.

Meanwhile, she hopes her social media projects will take off among the internet-loving Swedes.

“With the possibilities that I see here and me being a Muslim and a lover of social media, I thought it would be a great idea to start my new YouTube channel with this type of video and hopefully I plan on doing many more social experiments in the future.”

“I am a Muslim… and that makes me unbreakable.”