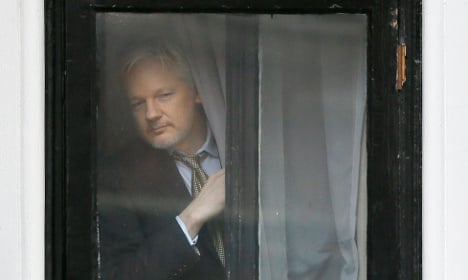 Published last month, the United Nations working group's non-binding legal opinion was instantly dismissed as “ridiculous” by London, which has now submitted its formal response, inviting the panel to reconsider its conclusions.

Assange faces a 2010 rape allegation in Sweden but has been inside Ecuador's embassy in London for nearly four years in a bid to avoid extradition.

The 44-year-old Australian fears that from Sweden he could be deported to the United States over Wikileaks' release of 500,000 secret military files.

The UN panel said the detention, which it concluded Assange was living under, had violated his human, civil and political rights.

“The working group's opinion is deeply flawed and Mr Assange has never been the subject of arbitrary detention,” the British Foreign Office said on Thursday. “His human rights have been protected throughout.”

TIMELINE: The twists and turns of the Assange saga

Painted as a hero to supporters and a dangerous egocentric to detractors, Assange founded WikiLeaks in 2006 and has been portrayed in two movies in recent years.

He initially spent 10 days in a London prison in 2010 having been refused bail, but his detention was “absolutely in line with the relevant legislation and regulations”, Thursday's statement said.

The former computer hacker's series of failed court appeals against extradition to Sweden took 18 months and “cannot be considered excessive or unfair”, the rebuttal said. “During this period he was granted bail and so cannot be considered to have been detained.”

Assange was granted political asylum by Ecuador and went into hiding in its embassy in 2012.

British Foreign Office minister Hugo Swire said: “The original conclusions of the UN working group are inaccurate and should be reviewed. We want to ensure the working group is in possession of the full facts. Our request for a review of the opinion sets those facts out clearly.”

“Julian Assange has never been arbitrarily detained by the UK, and is in face voluntarily avoiding lawful arrest by choosing to remain in the Ecuadoran embassy. The UK continues to have a legal obligation to extradite him to Sweden.”

The Swedish government has also rejected the UN working group's ruling, saying it is not legally binding.

The UN panel said Assange should be able to claim compensation from Britain and Sweden. Assange hailed the findings as a “victory”, but has continued to remain in the Ecuadorian embassy.

The working group will consider Britain's response on April 18th in Geneva.