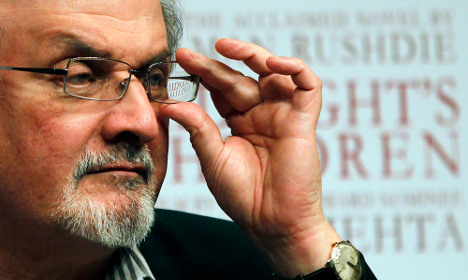 In a statement criticizing the death sentence, or fatwa, the head of the Swedish Academy, Tomas Riad, said: “The fact that the death sentence has been passed as punishment for a work of literature also implies a serious violation of free speech.”

“The principle of the independence of literature from political control is of fundamental importance for civilization and must be defended against attacks by avengers and the adherents of censorship,” he added.

Using the same principle of independence, the academy had originally declined to take a position on the 1989 fatwa on Rushdie, saying it was torn between showing its support for the author and maintaining its expressed neutrality.

The death threat was issued against Rushdie by Iran's then supreme leader, the late Ayatollah Ruhollah Khomeini in 1989 for the novel 'The Satanic Verses', which he deemed blasphemous.

The fatwa was, as Rushdie wrote in his 2012 memoir, “a first note of the dark music”. Born in India to non-practising Muslims and himself an atheist, the writer was forced to go underground.

The murder or attempted murder of his translators and publishers followed and the British government placed him under police protection.

Three members of the Swedish Academy, Kerstin Ekman, Werner Aspenström and Lars Gyllensten, had been critical of the institution's decision to remain silent and refused to participate in any of its work. They were not, however, permitted to resign.

With the addition of new members over the past three decades, the Swedish Academy decided to take a position on the fatwa after the amount offered for the assassination of Rushdie was recently increased.

In February, 40 state-run media outlets grouped together and increased the bounty for Rushdie's death.

“The death sentence and the reward money are flagrant breaches of international law and rules of civilized interaction within the world community and therefore can in no way be compatible with normalization” between Iran and West powers, Riad said in the statement.