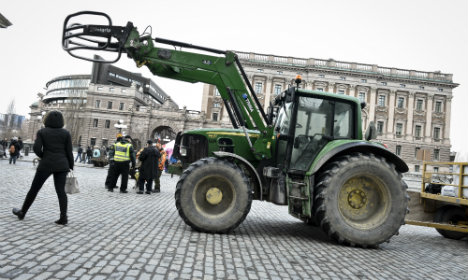 The farmers are taking action against what they have termed ‘rural death’ by chugging their way to rallies in a number of locations across Sweden.

Action has been carried out from Höör in the southern Skåne county to Birsta in northern Västernorrland, with queues getting up to 50 tractors in length, according to reports by SVT Nyheter.

Protestors also made their way to Mynntorget in central Stockholm.

“We are 40-50 tractors on the way [to Birsta’s large shopping centre] now, and we got a few ordinary Svenssons to take note of rural Sweden,” Fredrik Nordin, vice spokesman in the Rural Action (Landbygsupproret) group, told TT, according to the SVT report.

Nordin was defiant about the inconvenience caused to road users by the group’s protest.

“Sweden can’t survive without its agriculture,” he said.

It is not the first time the group has taken action to bring attention to what it considers to be poor conditions in the agriculture industry.

In September 2015, hundreds of dairy farmers descended on Stockholm to protest against taxes and laws that they said made the Swedish dairy industry unable to compete with foreign rivals.

The aims of the current protests include getting more people to buy food from Swedish producers, instead of choosing imported goods, Nordin said.

“When we drove through Timrå, people were waving and giving us the thumbs up,” said Nordin. “But as soon as they get into stores, they forget us and buy whatever’s cheapest.”

One dairy farmer a day is currently closing shop, said Nordin to Aftonbladet, pointing to a discrepancy between the earnings of Swedish farmers and those in competitor countries as one of the reasons for the 'erosion' of countryside economy.

The protests have brought the group to the discussion table with Agriculture Minister Sven Erik Bucht – but without any tangible result, according to Nordin.

Nordin also said that the group wanted to bring attention to the pitfalls of urbanisation.

“Sweden is more than just the big cities,” the farmer told Aftonbladet. “But if we carry on like this, we'll have no countryside left.”