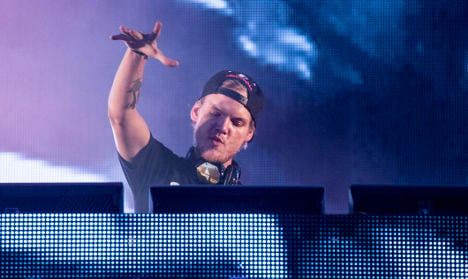 Avicii performing in Srockholm in 2015. Photo: Christine Olsson/TT
The star revealed he was set to stop touring in a long Facebook post to his fans on Tuesday morning.
“Thank you for letting me fulfil so many dreams. I will be forever grateful to have experienced and accomplished all that I have with the help of the team around me and my beloved fans,” he began.
The 26-year-old, whose real name is Tim Bergling, said he had reached his decision after taking a road trip with some of his friends.
“Two weeks ago, I took the time to drive across the U.S. with my friends and team, to just look and see and think about things in a new way. It really helped me realize that I needed to make the change that I’d been struggling with for a while,” he wrote.
His post also explained: “I’ve become an adult while growing as an artist, I’ve come to know myself better and realize that there’s so much I want to do with my life. I have strong interests in different areas but there’s so little time to explore them”.
READ ALSO: Five unforgettable Avicii moments
Avicii currently lives in a luxury house in Los Angeles, but hails from Stockholm and is a regular visitor to his home country. He hinted that he was planning a return to the Swedish capital by including a new phone number at the end of his Facebook post, starting with +46, the code for Sweden.
With hits including 'Wake Me Up' and 'Hey Brother', Avicii is one of Sweden's most successful music exports following his rise to stardom in 2011 with the track 'Levels'.
The DJ previously cancelled a number of tour dates in 2014 after undergoing an appendix operation and last year he also skipped gigs after his spokesperson said he was in need of a “well deserved break”.
Fans immediately took to social media on Tuesday to express their disappointment at his decision to call time on performing, although many also vocalised their support for the star's next steps.

Sorry to see you go @Avicii, the impact you had on dance music will forever be felt. Follow your path to happiness wherever it takes you

In the run up to the annuouncement, Avicii himself re-tweeted an image posted by his manager Ash Pournouri claiming that “the music industry will never be the same again”, containing the date of Tuesday's news.

His current final scheduled gig in Sweden is at Pildammsparken in Malmö on August 5th.

Tune back in on Tuesday @Avicii pic.twitter.com/jpNdQCxL6Y