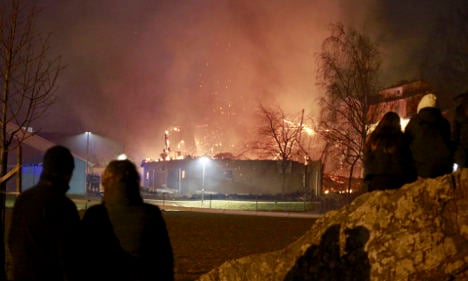 Locals watching the fire on Monday night. Photo: Per Groth/TT

Emergency services were called to the school's sports hall on Monday night following reports of flames and heavy smoke coming out of the building.

Dozens of local residents were asked to leave the area and find an alternative place to stay at the end of the Easter break, following fears that the fire could reach their homes or that they could become ill from smoke damage.

“The flames spread so rapidly that one can suspect that this was planned,” Ivan Åslund, a spokesman for the region's police force told the TT news agency.

He later confirmed to Swedish tabloid Expressen that officers were working on the basis that the fire was a planned arson attack and added that police would report back following a “technical investigation”.

Noone is believed to have been hurt in the blaze. Önsta is a subub of Västerås, a small city 100 kilometres west of Stockholm located on the shore of one of Sweden's largest lakes, Mälaren.

The Önsta school teaches children aged between 12 and 15 years old. It has around 350 pupils, according to its website.