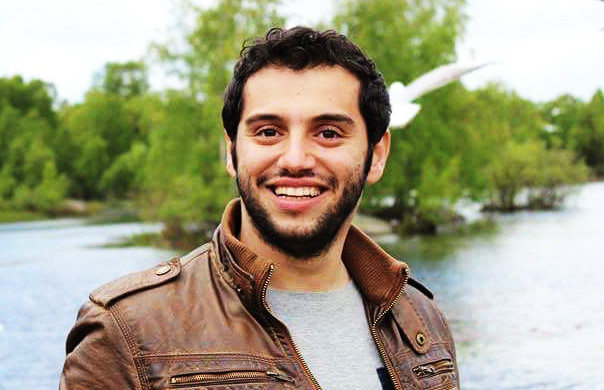 There are seventeen remaining Norias on the Orontes river in the Syrian city of Hama. Constructed over five hundred years ago, the devices were designed to raise water up from the river to the city’s irrigation system. But that is not the purpose of the modern Gothenburg version.

“My aim is to reveal our beautiful cultural heritage, an ancient Syrian masterpiece here in Sweden; to be built by our hands, in and for Sweden,” says Amr. Amr, 27, left Syria in 2013 and moved to Libya where he worked as a news editor and a producer.

“I was quite settled and satisfied with where I was living,” he explains.

But in February 2014 Amr was forced to reconsider his future.

“A colleague and I were kidnapped in Tripoli. The kidnappers were disguised in military uniform and took us off the street claiming that we had intercepted a minister’s convoy. They drove us to one of the city’s suburbs, as they claimed, for an investigation. They took everything we had and then released us.”

“It was a miracle they didn’t shoot us, thank God. But then I decided to leave,” Amr says.

Later that year, Amr decided that the perilous sea journey to Europe was his only option for survival. Despite the obvious dangers, the chance of a peaceful resettlement in Europe was favourable compared to the hellish reality of Syria and the chaos of Libya.

“I chose Sweden for many reasons, but primarily to ensure a long-term safe haven – to settle down, work and achieve,” he says.

Since he arrived in Sweden, Amr was determined not to drift into inertia but to interact and be creative within the new community.

“I always wanted to remain active and I passionately seek to leave resonating traces,” he explains.

Soon after he arrived in Sweden, Amr met Jonathan and Martin, two Swedish friends who visited Syria before the war. While they were there they had been impressed by the Hama Norias.

The three put their heads together and came up with a plan to build a similar wheel in Gothenburg.

“The artifact would be an unprecedented physical representation of openness, multiculturalism and coexistence.” Amr explains.

“We are just waiting for legal permission.”

Amr’s efforts go beyond the artistic statement. He and his friends have founded a non-profit organization – also called “Noria”– to support newcomers in Sweden.

“We will mainly run activities for integration – providing language lessons, social activities and personal guidance. Anything to help spread knowledge and awareness about Sweden and to help people engage,” he says.

Amr acknowledges that the locals are doing their best and are almost pushed to their limits. But he believes that integration is two-sided, noting that “sometimes the welcoming communities might underestimate us or simply aren’t aware of our education, knowledge and potential to engage and achieve”.

“I perceive that the swedes are doing a lot for the sake of integration, they are over pressured. I think we should help them to assimilate ourselves and others around us.”

So learning the language and being willing to engage with people is the key to understanding Swedish society’s cultural codes. This eases the community’s acceptance, as he puts it:

“Once you get along with [the Swedes], they are very sincere, open and nice.”

Until the legal processes for building the ‘Noria’ are complete, Amr is leading a class at Lernia in Gothenburg, where he teaches Swedish to almost 120 students. He also runs the same course in Kungsbacka for 30 more students.

And since his early days in Sweden, Amr has run an Arabic digital radio station called ‘Swedena’, offering explanations of Swedish laws, language sessions and some entertaining content.

“If we can help ease our integration, why not?” he concludes.