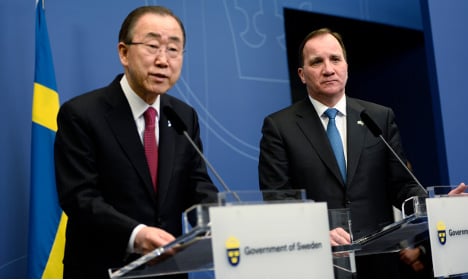 The Secretary-General travelled to Sweden directly from Geneva, where he kicked off a ministerial conference hosted by UN refugee agency UNHCR on Wednesday morning by calling on all countries to help resettle nearly half a million Syrian asylum seekers over the next three years.

“This demands an exponential increase in global solidarity,” he told the summit.

The UN wants to resettle around 480,000 refugees by the end of 2018, but is facing a tough challenge as an increasing number of countries, including Sweden, have been tightening their borders in the past year.

Ban's visit to the Nordics comes less than two weeks after the EU struck a bargain with Turkey to plug migration flows to Europe, with all refugees arriving in Greece to be sent back across the border.

More than 1.2 million migrants have come to Europe since January 2015 in the continent's biggest migration crisis since World War Two, and around 4,000 have drowned while trying to cross the Aegean Sea between Turkey and Greece.

But the UN has criticized the deal, fearing it could violate international law.

Sweden on the other hand, which took in a record 163,000 asylum seekers last year, was one of the main proponents behind the controversial agreement made in Brussels.

“We must put an end to the unregulated, very dangerous escape over the Mediterranean which this year alone has cost several hundred people their lives,” Löfven said at the time.

However, if any harsh words were exchanged during their private meeting, it was not shown at the afternoon press conference, where the leaders had only kind words for each other.

“The UN has for a long time been the most important international platform for peace and security,” said Löfven about the organization headed by Ban for the past decade.

The Secretary-General meanwhile praised Sweden for bringing a feminist foreign policy to the international scene. He said he would listen to the Prime Minister's request to put women front and centre of the ongoing peace talks in Syria, which are led by Swedish-Italian diplomat Staffan de Mistura.

Responding to questions about UN criticism of the EU-Turkey deal, he said only that the determining factor would be “how it is implemented”. Later in the evening, Ban gave a speech at an event in Stockholm City Hall in honour of one of his UN predecessors, late Swedish diplomat Dag Hammarskjöld. The talk was attended by several high-profile guests, including Crown Princess Victoria taking a short break from her maternity leave since giving birth to Prince Oscar earlier this month.