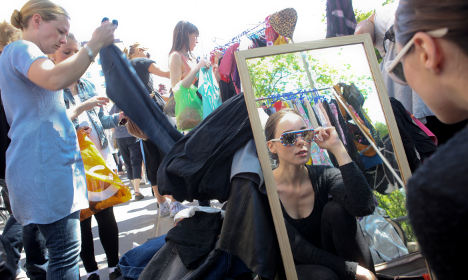 Snap up a bargain at Hornstull market. Photo: Fredrik Persson/SCANPIX

The annual outdoor spring and summer market in the Hornstull neighbourhood of Stockholm's hipster island Södermalm is opening its doors (figuratively – it's an outdoor market) for the first time of the season this year – a sure sign of spring in the Swedish capital. It prides itself on offering something for everyone: from the literature buff to the vintage designer. If you get hungry, have a snack at one of the many food trucks lining the street next to Lake Mälaren.

When: April 2nd-3rd, 11am-5pm (and almost every weekend thereafter) The travelling International Street Market, organized by Geraud Markets Sweden, is hitting the university town of Lund in southern Sweden on Tuesday. It's got all the Swedes' usual international food favourites, including Hungarian langos, French crêpes and Aussie kangaroo burgers. Not hungry? Check out the arts and crafts section of the many stalls instead.

What says Sweden and spring more than a west coast flea market on a boat? Not much, argues the organizers behind the 'loppis' (short for the Swedish word 'loppmarknad', which literally means flea market) held on the M/S Trubaduren vessel, anchored in Gothenburg's maritime city centre. This Sunday all money made will be donated to charity Missing People Sweden.

4. Food market at the crane dance

Every spring in Sweden, thousands of Eurasian cranes – a tall, grey-feathered bird – pass through the Lake Hornborga in central Sweden. It is one of the world's largest gatherings of migratory cranes and also sees masses of (human) Swedes and tourists travel to the area to watch the spectacle, called 'Trandansen' ('the crane dance'). This weekend it can be combined with a visit to a scrumptious food market set up at the lake, where local dairy, lamb and honey producers will sell the best of their goods. Yum.