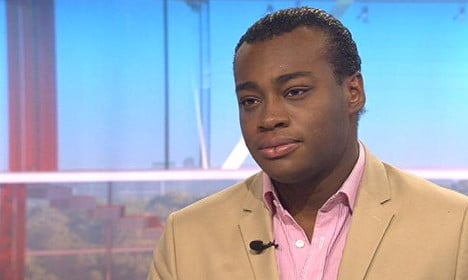 A screenshot of Bengtsson in a recent appearance on Swedish television posted on his Facebook page. Photo: Private/Facebook
The young politician, who was a member of Sweden's Moderate party, is understood to have died around a week ago, according to Swedish broadcaster SVT.
The network reported on Thursday morning that police had not yet formally identified his body but had good reason to believe Alexander Bengtsson had been in the vehicle at the time it was set on fire.
“At the moment there is nothing to suggest that it could be anyone else,” Henrik Sundin, a police officer working on the case, told SVT.
Sweden's Aftonbladet reported that the car Bengtsson was found in was registered as belonging to a member of his family.
The 20-year-old politician reported earlier this month that he had been the victim of a knife attack at his home. However police said they did not presently suspect anyone else was involved in his death.
“There is nothing to suggest that crime has been committed. We can't be completely certain, but we have received information that makes us currently not suspect any crime,” said Sundin.
The man's relatives are understood to have been informed that the body found in the car is most likely Bengtsson's.
The politician, who was a keen blogger, has spoken out against issues including racism, homophobia, nazism and communism in his posts.
At the turn of the year, he wrote: “2016 is the year when I will not tolerate any threat against me”.
“If I were you, I would not threaten me …. It will have consequences.. I'm tired of being subject to intimidation, death threats and assaults in the town and in my home.”
However a press release put out by the Swedish prosecutor's office on Thursday afternoon suggested that Bengtsson was the subject of a preliminary investigation into claims he had made false allegations regarding threats against him on three occasions.
The office said that Bengtsson had been invited to a hearing on March 23rd and had denied lying to police.