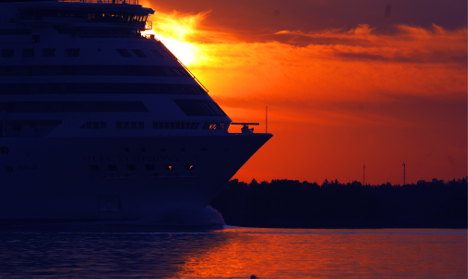 File photo of a Silja Line ferry. Credit: Hasse Holmberg/TT
Officers rounded up the suspects after a woman said she was raped on a party cruise which saw around 1700 students from Sweden travelling across the Baltic sea earlier this week.
Four of the group were arrested as they stepped off the boat on Wednesday with police revealing on Friday that a fifth man was tracked down on Thursday night. All are understood to be in their late teens or early twenties.
The trip was organized by Nordic company Fun Cruises and hosted by Silja Lines.
The former describes its student events on its website as offering travellers the chance to enjoy “a crazy action packed day at sea” on a “ship filled with students from all over the country”.
When contacted by Swedish media earlier about the rape allegations the travel company said all questions should be directed to the ferry firm. A Silja Line ferry in Stockholm. Photo: Bertil Ericsson/TT
Silja Lines confirmed to several Swedish newspapers that a woman had reported a rape on board one of its boats and said it was cooperating with officers investigating the allegations.
“Police are handling the case (…) We will contribute the material and information we have,” Janis Pavuls, press manager for the company, told the Aftonbladet tabloid.
He also noted that passengers must be 18 years or older to take part in the student trips.
All Sweden-Finland ferry crossings give adult passengers the opportunity to purchase duty free alcohol, offering a huge discount for Nordic travellers used to some of the highest food and drink taxes in Europe.
The latest incident is among several alleged gang rapes on Baltic cruises to grab the headlines in recent years.