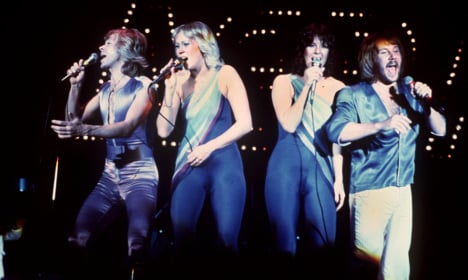 * Sorry! This story was an April Fools' Day joke and Abba have no plans to perform together *

It may not be the world tour fans were hoping for, but excitement will still likely be high when the four members of Abba perform a one-off gig on the Greek island featured in the movie version of Mamma Mia!

The news follows the band's brief reunion at the launch of 'Mamma Mia! The Party' in January, Björn Ulveaus' new business venture which sets Abba tracks to a new plot based in a Greek taverna, where guests are also invited to dine as they watch the action.

Now it seems the Swedes are planning to use their pull to pay back their dues to the original Mediterranean island that inspired Ulveaus.

“We're absolutely thrilled to welcome them to Skopelos,” tourism boss Christos Flipflopolous told The Local after revealing the news on Friday. “Everyone loves Abba, they're absolute legends.”

Abba fans have already been flocking to the island since the 2008 movie, which starred Meryl Streep, Pierce Brosnan and Sweden's Stellan Skarsgård.

But the October gig follows in the wake of criticism from local Skopelos residents, who claim that the blockbuster, which was filmed on the island, ruined its historic sites and genuine feel.

“All proceeds from the concert will be fed back to the community, to help us restore the island to pre-Mamma Mia glory, while still being able to accommodate tourists,” said Flipflopolous. The cast at the premiere of Mamma Mia! The Movie. Photo: Leif R Jansson/Scanpix

A note of warning to the most avid Abba fans among you: before you sell your house, car and youngest child to snap up concert tickets, note that we're not talking a full-length gig and reunion tour.

According to island officials, the Swedes have signed up to play just one song on stage together at the annual Skopelos Festival of Music, a week-long festival which celebrates Greek culture.

They are understood to be scheduled to perform on October 4th, coinciding with Sweden's cinnamon roll day, although it was not known whether the beloved pastry would feature in the festivities.

“Haha, I'll tell our bakers to start working on a cinnamon bun souvlaki immediately,” joked Flipflopolous when asked by The Local if he knew about the date's significance. The four Abba legends – Ulvaeus, Benny Andersson, Anni-Frid Lyngstad and Agnetha Fältskog – grabbed global headlines when they appeared on stage together for the first time in three decades at the opening night of 'Mamma Mia! The Party' at the start of the year.

Stockholmer Micke Bayart, who used to run an Abba fan club and has published a book about the band, told The Local from inside the venue at the time that seeing the four former pop stars posing for pictures together was “a dream come true that no one believed would happen”.