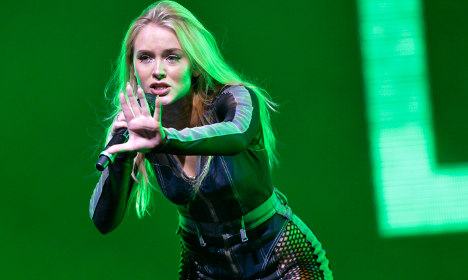 Only 18 years old, pop artist and instagrammer Zara Larsson is riding high on a wave of global fame. But in an interview with a Swedish newspaper she reveals some of the shocking comments she's received online.

“Sometimes I get really sad. Usually I get frustrated and angry. If they write 'whore', I block them, remove it and that's it. (…) But if someone comments sick things on a blog post I've spent time on, I just want to go home and explain that 'you're wrong',” she told Dagens Nyheter (DN) on Friday.

The outspoken young artist has made a name for herself not only for her pop hits, but for her firm stance on feminist issues. Yet some of the response to her social media activism stands in stark contrast to Sweden's reputation as a country of gender equality and tolerance.

“Everything I write becomes news and it's fun that people pay attention to things. To some it seems to come as a huge surprise that men are swines,” she told DN.

“It's just guys who write those kinds of things. I've never seen a girl be like 'I'm going to fucking push up a chainsaw in your pussy'.”

However, she said that most of the abuse stays online, with some of her main attackers even coming up to her to apologize in person.

“I've never met anyone who says things face to face. I've even had guys come up to me saying 'sorry, you blocked me on Instagram and Twitter'. I said 'what had you said?', because I've blocked so many, I don't remember. People take unbelievable liberties on the internet, just because it's the internet – nobody can see me here.”

Larsson joined the ranks of Swedes making a splash in the United States last week when she sang her new hit 'Never Forget You' on Ellen DeGeneres' talkshow, and is next set to appear on The Tonight Show with Jimmy Fallon. But when pop wonder Justin Bieber asked her to join his US tour, she said no.

“I asked, 'could I join the tour after a week, so that I get a week to rehearse?' They were like 'no, sorry'. So then I shat on it. It wasn't worth it. (…) Of course I wanted to do it, but it didn't work and I'm not going to twist myself inside out to do it,” she told DN.

Born in Stockholm, Larsson had her first breakthrough singing 'My Heart Will Go On' on a Swedish talent show in 2008. She is most famous for her huge hit 'Lush Life'.