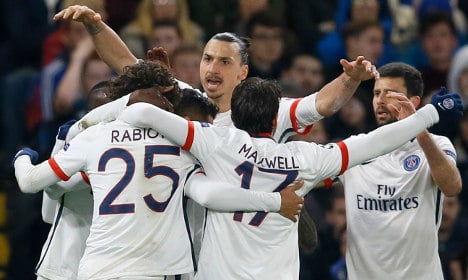 Ibrahimovic is set to become one of the transfer stories of the summer when his contract with the cash-rich French Ligue 1 club expires this June.

The Swedish marksman's agent, Mino Raiola, said he has received several offers including one “huge” one from China and three from Italy's top flight, where Ibrahimovic won titles with Juventus, Inter Milan and AC Milan.

But the Dutchman said Ibrahimovic, who will lead the Swedish charge at this summer's Euro 2016, has not ruled out remaining in France.

“I have received offers from every continent in the world, including from China. I'm not saying for how much, but it is a huge sum,” Raiola told Gazzetta dello Sport in an interview.

He added that PSG are “doing everything possible to try and make him renew [his contract]. Paris remains an option.”

But the Swede has yet to play in England's Premier League and Raiola claimed that “all the big clubs s here, with the exception of Manchester City, where [Pep] Guardiola is the coach, have knocked on my door”.

And despite persistent rumours claiming Ibrahimovic could return to Italy, Raiola appeared to brush them under the carpet.

“All the big clubs want him, even Napoli,” said Raiola, who took a cheeky swipe at the Serie A club's film-producing president Aurelio De Laurentiis.

“But there, all they're good at is making films.”

Ibrahimovic arrived in Paris in July 2012 from AC Milan but after helping PSG to a fourth successive league title last month he appeared adamant that he would not be in the French capital next season.

“For the moment I am not at PSG next year,” he said before cheekily adding: “If they replace the Eiffel Tower with a statue of me, I will stay at PSG. I can promise that!”