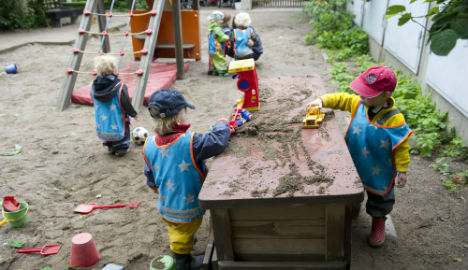 At the Egalia nursery school in Stockholm, children are only ever referred to using the pronoun 'hen'. Photo: Fredrik Sandberg/TT
During a job interview the headteacher allegedly insisted on instead using the feminine personal pronoun ‘hon’ — meaning ‘she’ — while avoiding using the applicant’s preferred name.
“I had never before encountered anyone who so deliberately neglected to call me by my name,” the interviewee wrote in her official complaint to the ombudsman. “And if that doesn’t happen, despite the headteacher knowing about it, then that is discrimination against me and my gender identity.”
“My gender identity is non-binary, which in my case means that I neither identify myself as a man or a woman,” the complainant explained.
“I felt inadequate as a person, and as if I couldn’t fully exist, as if my full gender identity and identity were not acceptable”.
The Swedish Academy only included ‘hen’ in its  official list of Swedish words in 2014, decades after the word — which is derived from the Finnish gender neutral personal pronoun ‘hän’ — was first proposed by gender equality activists.
According to the language periodical Språktidningen, ‘hen’ was by 2014 used once in the Swedish media for every 300 used of ‘hon’ or ‘han’, up from one in every 13,000 in 2011.
However major newspapers still generally treat it as a neologism, with Dagens Nyheter for instance instructing journalists not to use it.
Clas Lundstedt, a spokesman for the Equality Ombudsman, said that the agency had yet to decide whether to take the case to court.
“We have just started the investigation so we don’t know if we’re going to go to court with it or not,” he said.