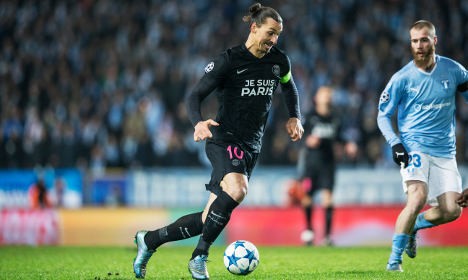 PSG's Zlatan Ibrahimovic at a game in Malmö in November. Photo: Andreas Hillergren/TT
'We would like to sign him, but the money is crazy,' a 'deal insider' told the UK's Daily Mail. 'We get that he would be a significant capture, but is he really worth that money — and at the age of 34?”
According to the Italian press, Ibrahimovic has received offers as high as £1m a week to move to China to play for one of the country's emerging football clubs, but is unwilling to relocate to the far East.
Paris Saint-Germain coach Laurent Blanc said on Friday that the Ligue 1 champions were patiently awaiting a decision from Swedish star Zlatan Ibrahimovic concerning his future.
“Zlatan? We are still in reflection and discussion. Our wish is to talk with him to see what he wants exactly, we know what we want from him; after if we click we'll see,” said Blanc of the 34-year-old Swede whose contract expires at the end of the season.
“I've nothing new to tell you on that subject; remain patient, it's not signs that we need but certitudes,” Blanc added, telling journalists: “If one day you are out of contract, you'll do the same thing, you'd contact everyone.”
Ibrahimovic has not ruled out remaining with the French champions, his agent Mino Raiola revealed.
Raiola said the Swede has received several offers including one from China and three from Italy's top flight, where Ibrahimovic won titles with Juventus,Inter Milan and AC Milan.
But the Dutchman said Ibrahimovic, who will lead Sweden at this summer's Euro 2016, could stay in France.
“I have received offers from every continent in the world, including from China. I'm not saying for how much, but it is a huge sum,” Raiola told Gazzetta dello Sport.
He added that PSG are “doing everything possible to try and make him renew (his contract). Paris remains an option.”
Ibrahimovic has yet to play in England's Premier League and Raiola claimed that “all the big clubs there, with the exception of Manchester City, where (Pep) Guardiola is the coach, have knocked on my door”.
The Swede could play against Nice on Saturday, four days before Paris host Manchester City in the first leg of their Champions League quarter-final.
However, Javier Pastore is a doubt and Marco Verratti is still out with a groin problem, while Angel Di Maria will not play in the Ligue 1 game after picking up a leg knock on international duty with Argentina.