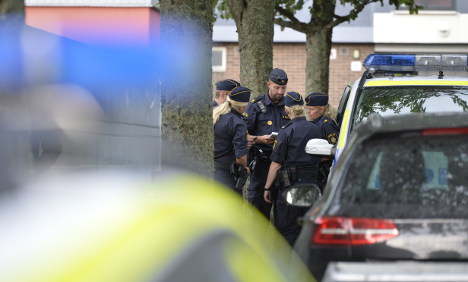 The teenager was flown to a hospital in Stockholm by air ambulance on Sunday night after police were called to the suburb.

According to the TT news agency, the stabbing took place on a street in the centre of Alby, with Swedish tabloid Aftonbladet reporting that a crowd of “30 to 40” people had gathered at the scene by the time officers arrived.

“There are witnesses, but what they have seen I do not know,” Dan Grip, a duty officer told TT late on Sunday.

The stabbing is understood to have happened shortly after 8.30pm.

Fredrik Andersson, another duty police officer, told Aftonbladet that the boy had been “stabbed in the stomach” and had sustained serious but not life-threatening injuries.

Forensic teams were sent to the site and carried out a detailed examination of the crime scene in the early hours of Monday morning.

Police said they were hoping to be able to interview the boy later in the day.

Alby, which is towards the end of Stockholm's red subway link to the south-west of the city, is home to around 10,000 people. Close to a large lake, Albysjön, and surrounded by forests, it is a mostly residential neighbourhood with a diverse population and a higher than average unemployment rate.